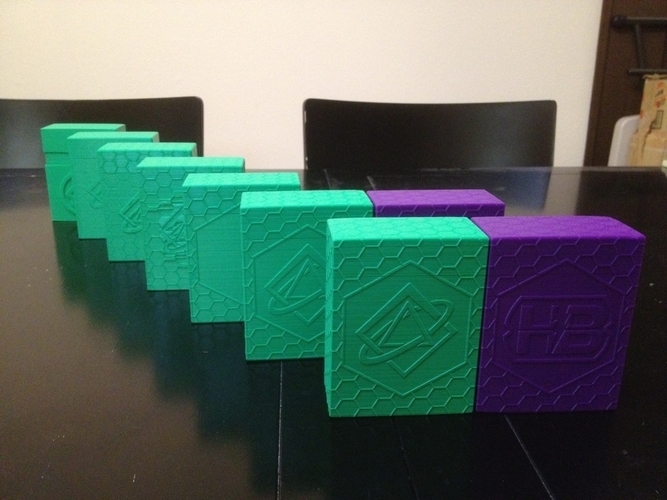 Summary Need some science-fiction themed deck boxes with awesome texturing, friction-fit lids, beveled edges, and support for arbitrary emblems? Well, fire up OpenSCAD to write a monstrous script that generates everything just short of the kitchen sink, and use Inkscape to hand-trace emblems as needed! Instructions PRINTING: If your nozzle width is 0.4mm and layer height is 0.27mm, then slice any of the deckbox_*.stl files with 1 extra shell and 10% infill. If not, then update the printer-parameters at the top of deckbox.scad and re-export the STL to get a model that should slice with excellent floors and sleeve-walls. ADJUSTMENT: Once printed, if the lid doesn't fit as well as you'd like, then adjust "sleeve_xy_gap" in the script to obtain a perfect fit for your printer (the variable is commented with additional documentation). ADJUSTMENT: This particular design allows space for roughly 60 cards in card-sleeves. If that's just not your thing, then you can adjust "deckbox_width", "deckbox_depth", and "deckbox_total_height" until the script echos a cavity-size that fits your needs. EXPANSION: If you want to create deck boxes using new emblems, then create a line-segments-only dxf using Inkscape (tutorial: http://repraprip.blogspot.com/2011/05/inkscape-to-openscad-dxf-tutorial.html) and call deckbox_plate() as appropriate (see the bottom deckbox.scad for examples). Don't worry about exact size or placement, since deckbox_plate() has parameters for emblem-specific scaling and xy-offsets to put the drawing in the right place. (Oh! And please do upload them as derivatives!) NOTE: I recommend checking out hexagon_lattice_bounded() and beveled_cube(), as they should prove to be fairly reusable in other designs. HISTORY: For the curious, the printed generations were: SirGronk's design, which printed with much too tight a fit on my printer (hence the broken sleeve), thus inspiring me to create the OpenSCAD script that went a bit farther than originally intended. After building the basic deck box script, I found I was unable to use OpenSCAD to slice the emblems off the front of SirGronk's models for grafting purposes. Reconsidering my original plan, I switched to re-creating the emblems entirely. However, the completely flat sides and back just seemed like a waste of a 3D printer. More detail was needed! Adding raised hexagonal tiles, the deck box felt strangely like a turtle-box instead of high-tech-box. Also, the emblem was getting lost in the tiles. This wouldn't do! The raised-hexagons were turned into ribs on the sides (top and bottom remain raised for printing reasons), and the emblem was given a frame to clean things up. Unfortunately, I had some positioning bugs that caused the slicer to hiccup. If I had used a gcode-viewer this wouldn't have been printed! Fixing most of the positioning bugs, I tried again, but sadly the emblem was floating off the surface by an imperceptible distance, meaning it ceased to exist entirely once sliced. Again, if I had used a gcode-viewer this wouldn't have been printed! I went on a bug-safari and cleaned up the entire script to try to stamp out and existing bugs and reduce chances of regression in the future. The printed Shaper box (green) was of gift-quality, so its paired Haas Bioroid box (purple) was printed and queued for gifting. After showing the whole printed history to my dad, I mentioned my dissatisfaction with the emblem-frame creating a "front" side for the lid, at which point he suggested that I put the emblem on both sides. Of course! After trivial modifications, slicing, and printing, the final iteration was ready for gifting. 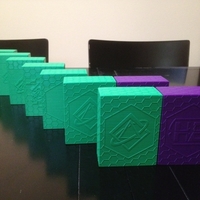 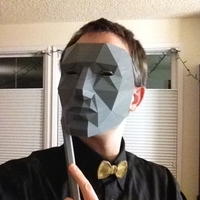 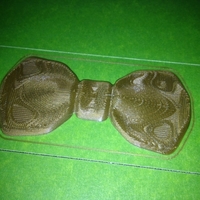 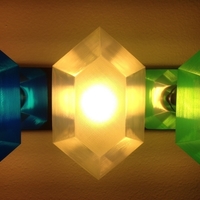