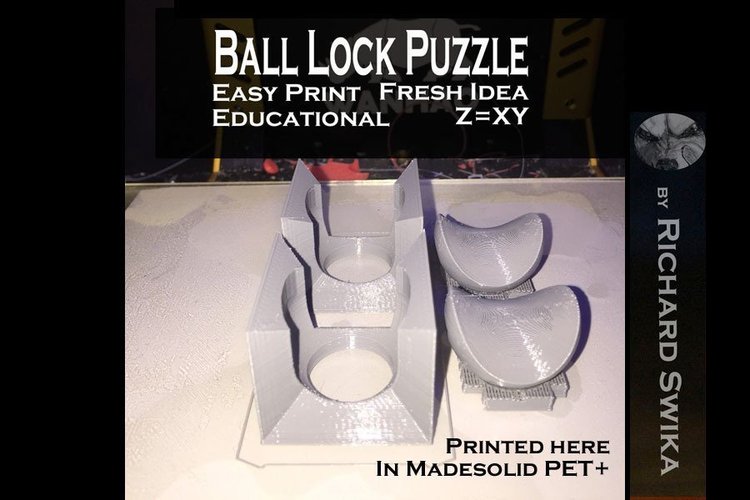 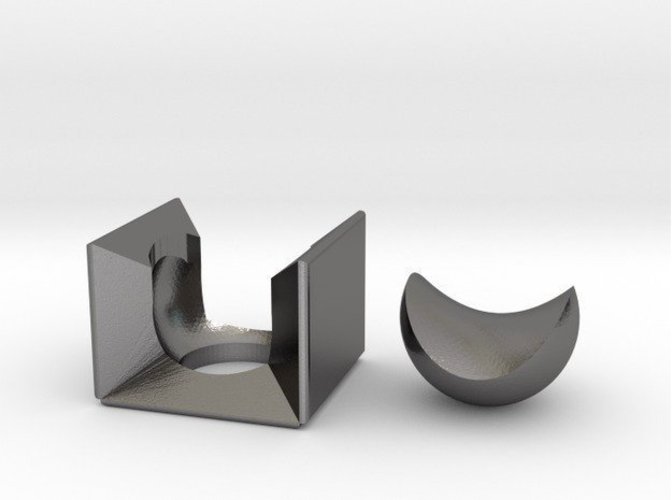 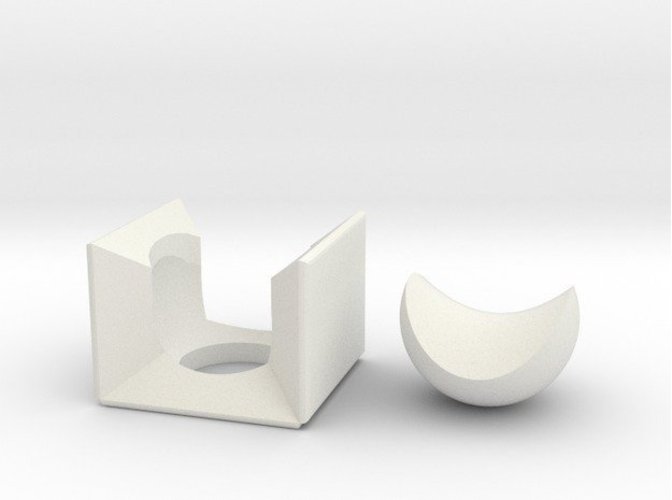 Here's an amusing little puzzle I'm sure you never saw before because I just invented it. I've been calling it the z=xy puzzle; read on to find out why. It is a more complex version of my 2 piece cube puzzle, but now including a magic ball lock. It is part puzzle, part magic trick, part math lesson. The theory that makes it work comes from pure mathematics. Once the cube is closed and locked by rotating the ball, the cube is held closed by invisible mathematical forces. Normally, a sphere would not be retained in a hemispherical cavity, but not in this case. What gives?

You start with the cube in two halves, each side holding half of a ball. Show your victim, I mean the audience, the inside of the cube and point out how the inside surfaces are all smooth with no overhangs to hold the cube together. Slide the cube halves all the way together to form a solid cube and then apart again to demonstrate that the cube opens and closes freely. Now close the cube and hand it to an audiance member with instructions to pull it apart. They can't.

There are two secrets, 1) secretely rotate the ball from the back side of the cube as you hand it to the audience member: this locks the cube shut, 2) invisibily flick the cube itself 180 degrees from the position you held it in when you opened it. Combine 1) and 2) into one motion as you hand it over. The unsuspecting audience member will try to pull the cube open just like you did but won't be able to because they will be pulling the pieces closed, not open, after the rotation. If they they figure that out, the cube will still not open because the ball lock holds it shut unless thay rotate the ball to the correct orientation on two axis' and pull on the correct cube faces.

There are two facts that make it work. 1) The ball is bisected symetrically, but in a special way (z=xy) that only allows the halves to be seperated exactly on one axis. 2) The profile of the hemisphere viewed from the pole is non-circular, counter intuitively so, thus leading to a paradox in the mind of the audience. Each hemisphere locks into the socket on the opposite side of the cube unless it is rotated in the correct direction. The combination of these two facts means that the cube will only open when the ball seperaton axis is lined up with the cube speration axis, and the ball is rotated in the one direction where it will release from the socket on the opposite side.

Some of you may have noticed that the cool saddle like surface bisecting the sphere is a hyperbolic paraboloid, z=xy. Here is a wonderful practical application of something you learned about in school. Who knew? Applied mathematics meets 3d printing.

I've provided the complete puzzle in one file so if you are printing in one color, use that file. I've also provided the pieces in seperate files, so you can easily print each piece in a different color. UPDATE: At raver1975's request, I've added another version of the ball with a hollow core, so you can hide something inside.

Print at 0.2 mm layer, with support (required for the ball only). Make sure to use pleanty of fan so the overhangs on the bottom of the ball come out smooth. You may need to take some sandpaper and round out the bottom if it doens't come out perfectly round. The outside of the ball needs to be smooth and perfectly spherical so it turns freely inside the housing.

The hemispheres must be inserted into the housing properly for the puzzle to work. Insert the hemispheres with the saddle high side pointed towards the open sides of the housing, then rotate 90 degrees so the saddle low points are now towards the open sides of the housing. This is the default UNLOCKED position and is the only position where the cube will go together or come apart. Slide the two puzzle haves together with them rotated 90 degrees out of phase. Any rotation of the ball will lock the puzzle, so take a close look before you move it. You can tell where it goes by looking closely at the layer lines on the ball. Once you move the ball, you'll have to put it back in the exact same position (or rotated by 180 degress) to open the puzzle.

Get it on Shapeways

If you'd like to have one if these puzzles, but don't have a 3d printer yet or would like one made in metal, I have them available on Shapeways at my cost . Note, the shapeways model has been modified to meet their minimum wall thickness requirement, so looks a little different, but uses the same idea. You'll need to order two if you get it from shapeways, since it is only half the puzzle. On the plus side, you can get each side in its own color. The home print version actually has tighter seams, but in plastic you can force it open. 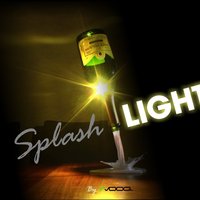 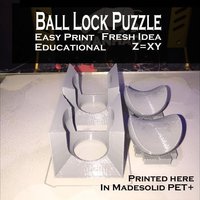 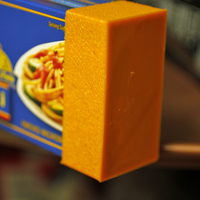 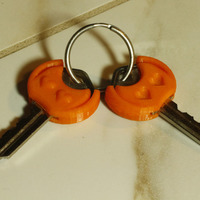 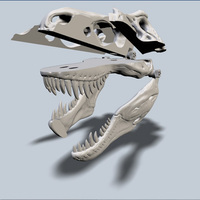 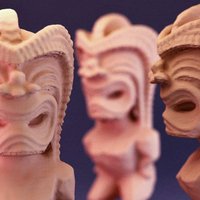