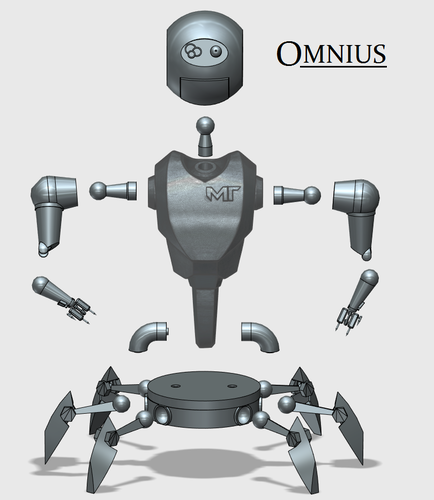 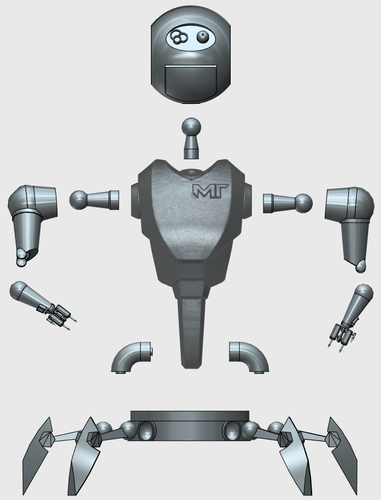 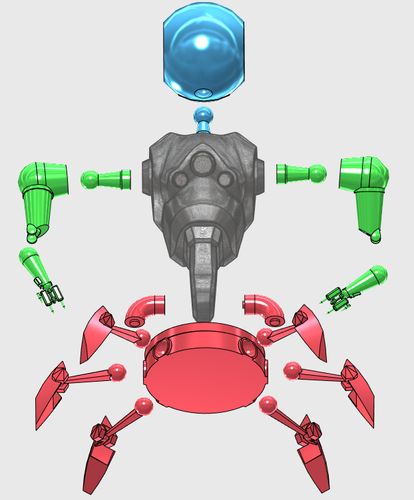 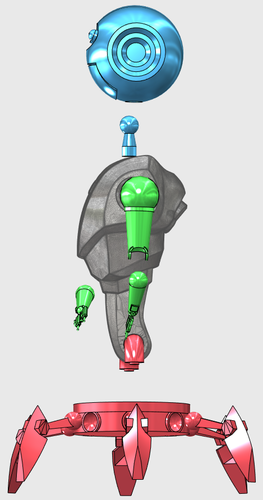 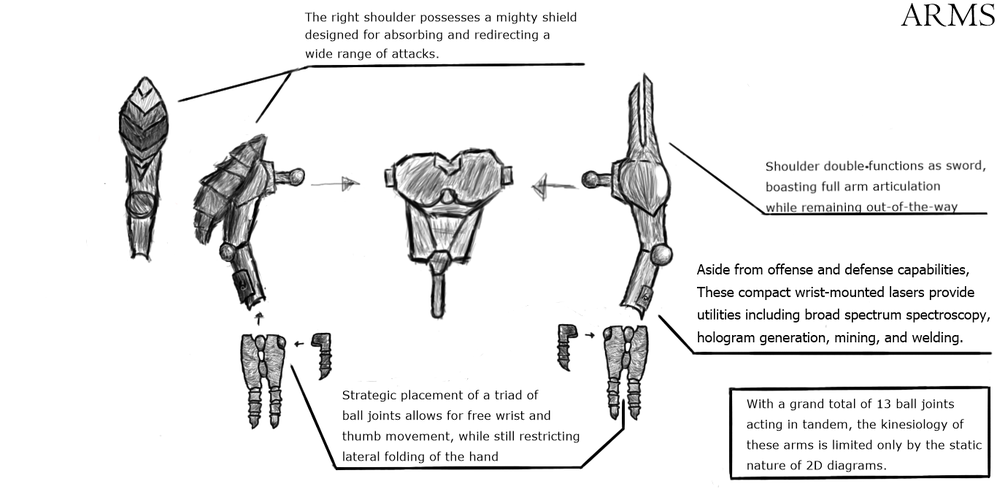 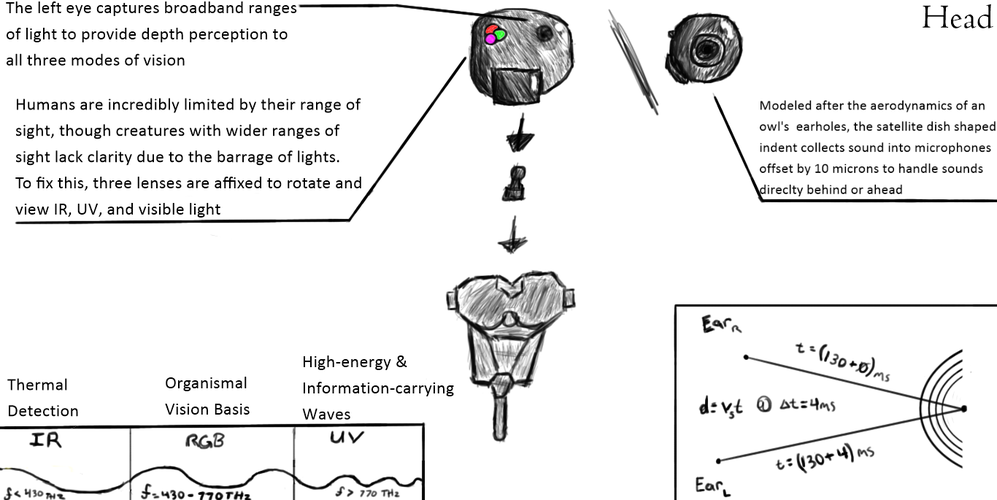 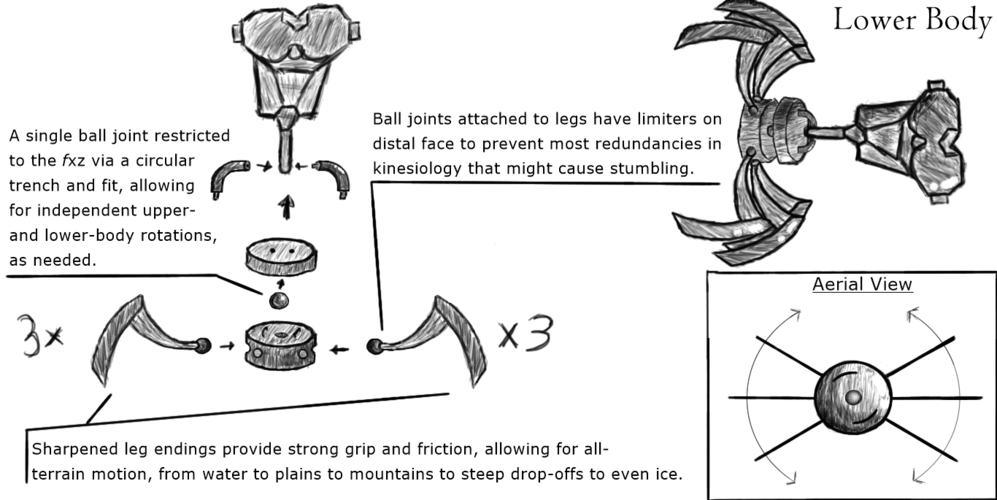 The MakerTron "Omnius" kit is designed to combine every aspect of life as a space faring robot and refine them into an attractive and efficient model. After all, every life-form needs three things:mobility, utility, and artillery.

These three aspects have been covered in various ways throughout the three primary sections of the kit. These sections are the lower body, arms, and head; covered in greater detail below, based on the full articulation kit.

Many forms and changes took place throughout the design process, so the models are sorted by the amount of articulations. The default print is easy print (with neck and shoulder attachments on a higher infill), but with a higher resolution printer, the full articulation kit is made for complete realism of movement. Disclaimer: I use a public printer, so while I did try printing and retesting certain joints, it may require slight scaling.

With independent lateral rotation, the lower body boasts extremely high control and opens the possibility for gyroscopic stability of the torso, making any maneuver a piece of cake without hampering the task at hand. Designed for traversing mountainous terrain and even scaling flat walls with sharp tips for anchoring support-- after all, why not make full use of the self-healing polymer tech in their space ships anyway? But don't think that stops these legs from moving quickly along flat-lands, hills, and even ice! The legs were designed to be able to be folded in and shuffled across ice (which obviously isn't made for load-bearing) to decrease the PSI.

In any even vaguely humanoid life-form, the arms are the pinnacle of offense and often in utilities in interacting with it's environment. These arms originally were considered to handle close range combat, however these are not the mainline defense though, as MakerTron civilization is A) largely peaceful and B) far more advanced than melee combat, so they were left out of the final design. Sparring is of course important for tactics and training, but the real weapons systems come from the arm-mounted lasers that are capable of generating lasers with enough focus to drill and weld-- which is far more than would be needed for eliminating hostile organics. Lower levels of laser can be used for broad-range spectroscopy (a wider range of sight) and hologram generation for communications. The hands simply specialize in grasping and manipulating objects within arms' reach, no matter the shape or size. They achieve this by using a hing the median axis of the hand, freeing the wrist but constrain the lateral motion for optimal grasping, which was originally intended to be two ball joints, but proved easier to assemble with a ball joint and a hinge.

The head has two primary sense functions: sight and sound. The ears are modeled to resemble an owl's satellite dish-shaped "ears" that funnel in sound. The microphones are offset by 5 microns to detect the distance from the source of the sound in the event that it was directly in front or behind the MakerTron. For the vision, the left eye see broad-spectrum light to generate depth perception, the right eye rotates to alternate between infrared, visible light, and ultraviolet. The benefits of this are that infrared can be used for heat imaging, ultraviolet can capture even private signals, and visible light allows for detection of physical obstacles.

How I Designed This

The legs were inspired by a Klann linkage and and a classic video game, "Paper Mario: The Thousand Year Door," with it's character Mimi. Those spider legs could burn themselves into anyone's mind.

The arms were originally intended to be inspired by Astuma's right arm in "Enchanted Arms," but took it's own shape based on the MakerTron's torso. The finite details still pay some homage though.

The head is more military based, with a sci-fi twist. Imagine spec-ops meet "Halo: ODST" and that's pretty much my idea going in.

See the concept sketches to see my initial plans for the project!

Author's Note This is my first major project, and it was a lot of fun! I liked seeing it come together, and I did print most of the parts, but not enough to fully construct it, so I hope someone out there enjoys it!! 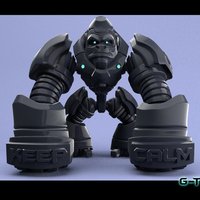 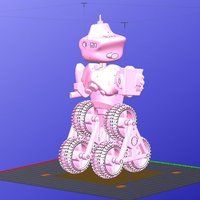 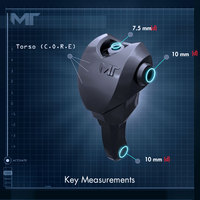 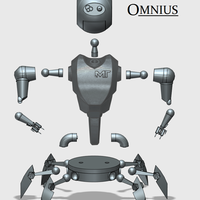