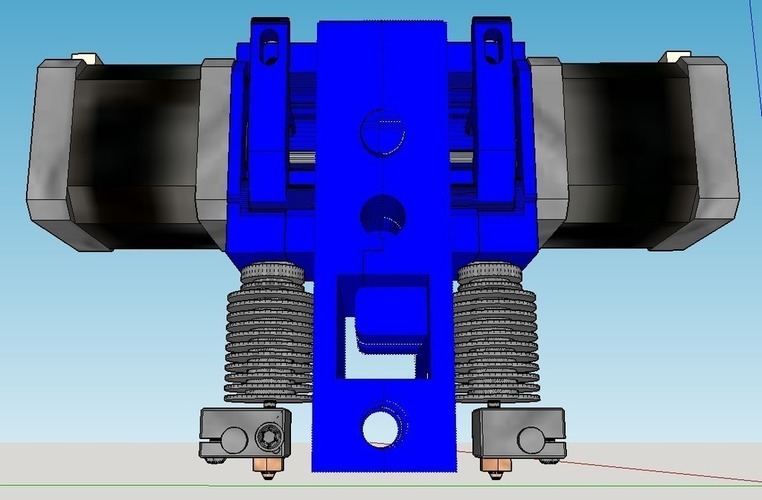 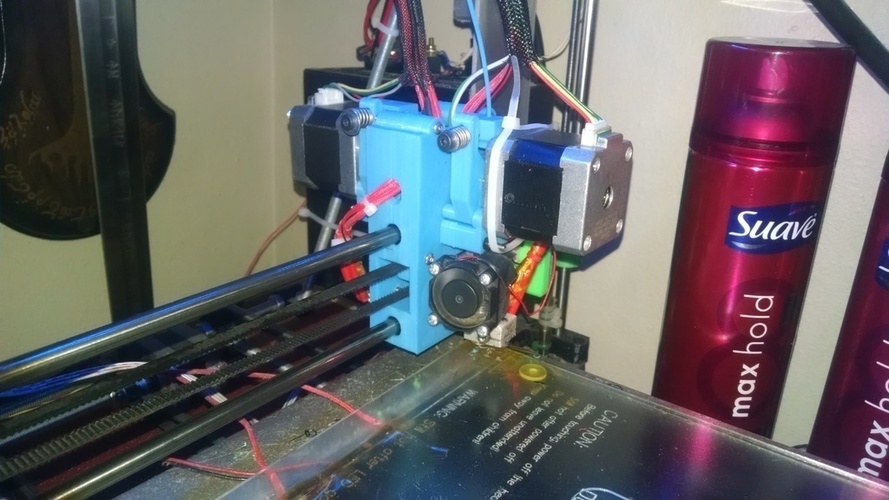 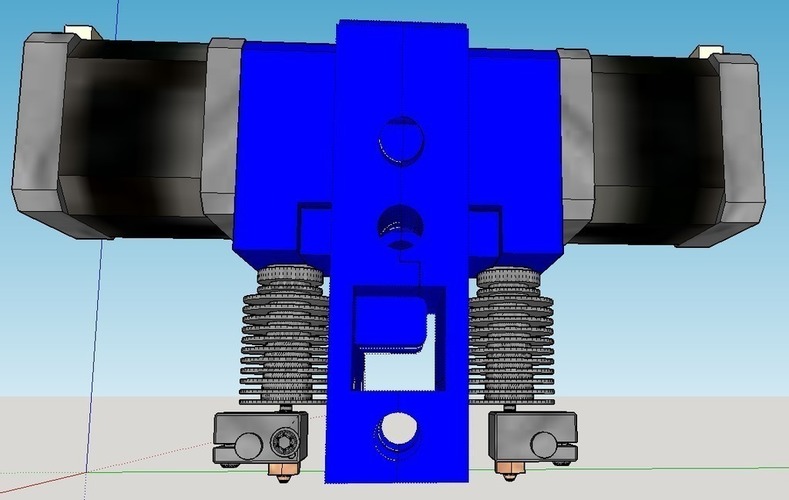 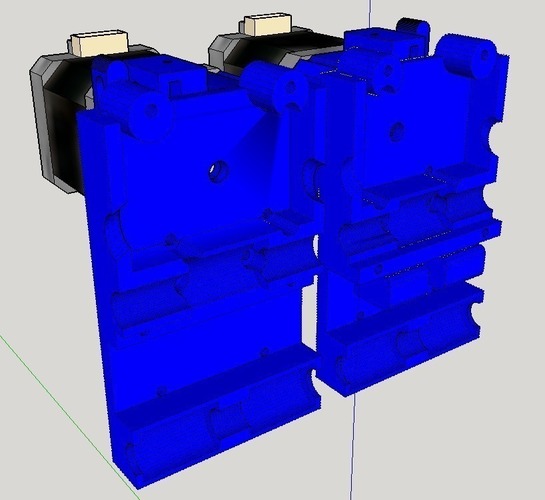 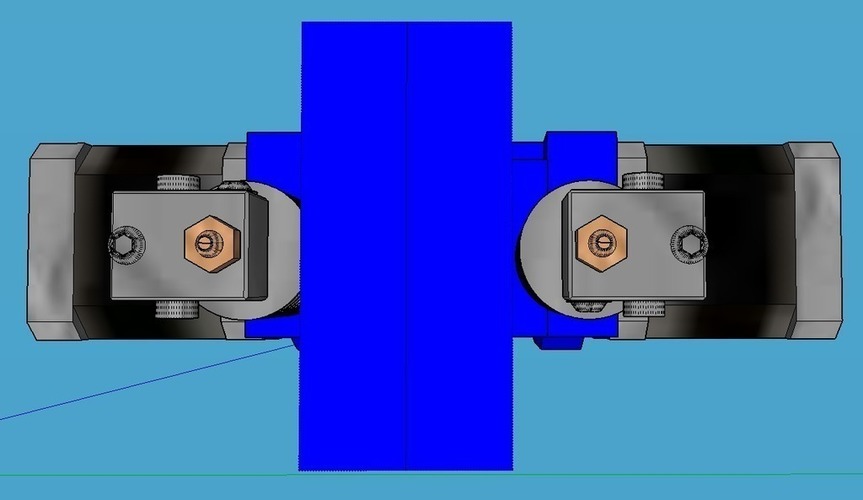 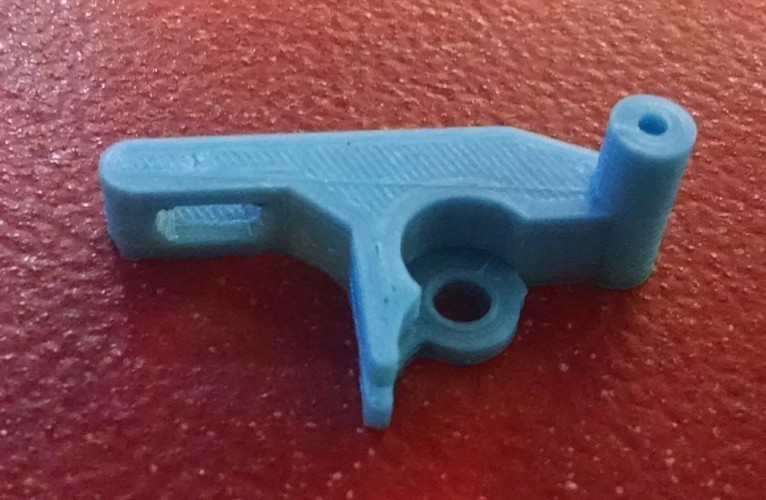 SummaryEDIT: 6/16/16 I uploaded a new version of the idlers that support the roller bearing on both sides, so it won't bend towards the idler and stop rolling. Supports are built in, just cut them out after printing. Use TWO washers with this version. If things won't fit you may have to clean up the inside a bit with a Dremel tool or similar. EDIT: Just wanted to give fair warning to anyone who is going to try this design, everything works fine, but there is no adjustment for the height of each extruder other than screwing the heat brake lower or higher on your cold end. That's really the only flaw I found and can be quite difficult to get both nozzles exactly the same height. In theory you wouldn't need to but nobody can print the parts flawlessly. Just wanted to give you a heads up! See Bobkeyes comment about adding a grub screw to the extruder itself for a really good idea on how to make it adjustable. You'd need to tap a hole you drill into your cold end to do it though. But it's a great idea! If you would like to work with the original SketchUp files you can download them here: http://ow.ly/UUDXx This assembly uses all the same parts as this design, except the screws that hold it together might be different lengths, and some things you'll need two of, of course. Like the idler bearings for example, and the MK8 drive gears. http://www.thingiverse.com/thing:760444 UPDATE! So I installed the newest version of this on my Prusa i3 today. With the 4 linear bearings it's quite sturdy and prints well. I have not worked all the bugs in my software out yet and only printed with one extruder so far. (My thermal sensor on extruder 2 is not working properly. I think I broke a lead off while installing everything) Everything works well and it moves smoothly. Of course the real question is are the two nozzles level with each other. I'll post updates soon. This is my newly designed dual (or single) extruder for the E3D V6. I previously uploaded another model that was wide along the X-axis and thus wasted printable width on the printer. This new version is only 63.5mm (2.5") wide and has the motors mounted facing lengthwise along the Y-axis so it doesn't waste print bed space, except for a small about in the Y direction equal to the distance between the two nozzles. I have NOT printed this out and tried it yet. I will be doing so in the coming week or two. This should work, but I have not tested it yet. If you print it out let me know how it works out! It's all 3mm screws of varying lengths. It uses the same toothed gear and bearings my other dual extruder uses. Look there for part info for now. I'll add a full guide and parts list here soon. Old dual extruder----http://www.thingiverse.com/thing:552748 If you have any recommendations or ideas please share them in the comments! EDIT1: I have been doing minor tweaks on the models, mostly to make screw heads fit better over the past couple days as I print the parts out. I will keep the files updated as I go but I'm pretty sure this is the final form now. 3-24-15 I will also be making a video tutorial on how to assemble this once I put a complete one together and figure out the easiest order to assemble it, and posting the link here. EDIT2: I added a hole in each x-carriage part becauese I noticed some stepper motors have longer shafts and the tip of the shaft prevented the motor form being screwed onto the rest of the assembly. The hole in the face of the clamping pieces allows the shaft to pass through instead of hitting. I also made it so the idlers can be lowered further allowing easier access to clean the toothed gear if it gets full of material flakes. 3-25-15 EDIT3: LOL ok I'm sorry for keeping changing the files so much. The differences are minor still. This version I added side holes to weave the wires from the extruders through and out the top center to reduce strain on the wires where they attach. I see there have been a lot of downloads. I'd love to hear any feedback anyone has on this assembly. EDIT4: Since this assembly is top heavy, I switched it to a 4 bearing X-carriage. I also tightened up the sockets the bearings sit in slightly so they are actually to spec in size. I had enlarged them to compensate for my printer but I realized that was a bad idea. The bearings should all fit snugly now. There are two versions of the X-carriage halves. They are identical except the space where the belt goes is 0.5mm tighter/looser between the two. if your printer tends to overextrude, or make holes smaller than they should be, use the "looser" version. If your parts come out perfect, use the "tighter" version. InstructionsThis uses four LM8UU bearings and one or two MK8 toothed pulleys depending on how many extruders you put on it. All the screws are M3 but varying lengths. The four per motor that screw the motor onto the extruder face will probably have to be trimmed with a dremel or screw cutter. The threaded sockets on the face of the nema 17 motors are shared by the screws that hold the back of the motor casing on. I'd guess about 5mm threaded length on those screws. You will also need an M5 screw, low profile nut, and a 5x10x4 ball bearing for each idler. Order of assembly: Insert your extruders into the base of the extruder face pieces. Press on the retaining cap for each. Screw the three M3 screws into the motors through the two seperate carriage pieces. Screw the two M3 screws that go through the carriage 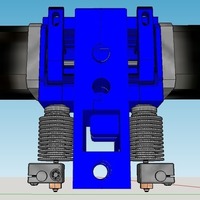 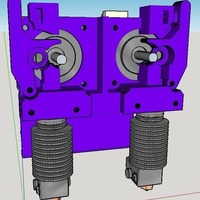 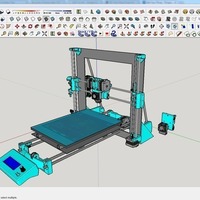 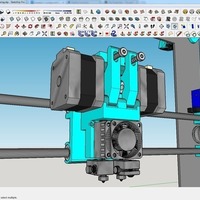