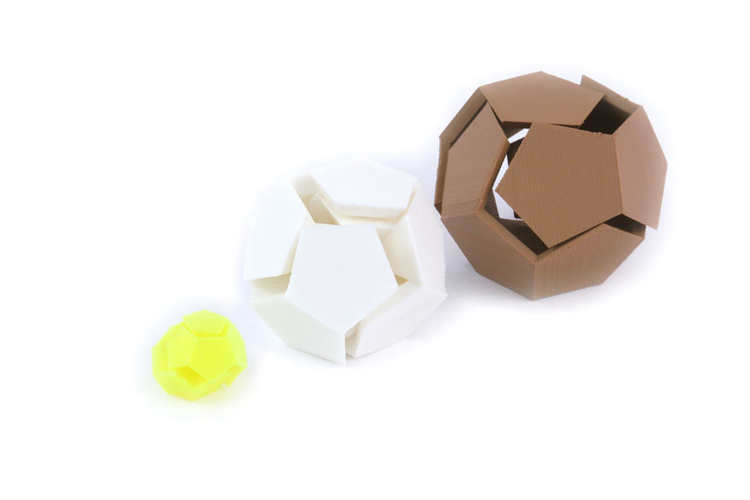 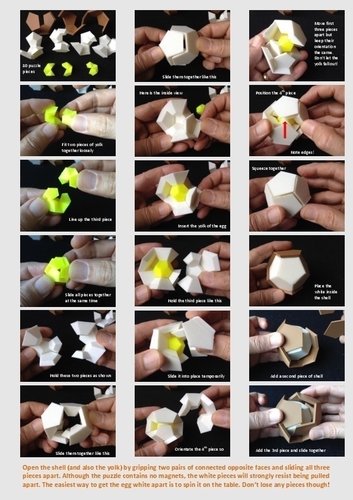 Summary This is my entry for the 2015 IPP Puzzle Design competition http://www.johnrausch.com/DesignCompetition/2015/default.htm#08 Read more about the story behind this puzzle in the 'How I Designed This' section The puzzle is composed of three nested layers of dodecahedra. The challenge is to crack Plato's egg into its constituent parts, find and disassemble the trisected dodecahedron at the centre, then put it back together again. Each of the three stages requires a degree of coordinate motion. The white of the egg is particularly hard to disassemble by hand but will easily come apart by spinning the egg on the table. You will need to print: 3 of the Shell pieces in light brown 2 of the White A pieces in white or clear 2 of the White B pieces in white or clear 3 of the Yolk pieces in yellow If you like this puzzle, please consider leaving a tip to encourage me to share more of my puzzles. Print Settings Printer: Mendel90 Rafts: No Supports: No Resolution: 0.15 to 0.2 mm Infill: 25% Notes: This is a tricky print that needs a well-tuned printer. If your printer is over-extruding, the pieces will NOT fit together. No support material should be required for any of the pieces but you will certainly need a good part cooling fan. How I Designed This The idea for this puzzle came from asking one simple question: Can the surface of a dodecahedron all be subdivided into a number of identical interlocking parts? Because the dodecahedron has 12 faces, there are four possible ways to divide these into equal groups. I soon discovered that two pieces each having a chain of six pentagonal faces would interlock but be impossible to separate. I also decided that six pieces each having two pentagonal faces would not make an interlocking puzzle. So, I began experimenting with three chains of four pentagons and discovered that it was indeed possible to wrap three identical shapes onto the surface of the dodecahedron. But would the pieces come apart? I used a computer program to extrude the shape outwards from a central point, turning it into a solid object. I printed out three of these shapes and proved that they could be assembled into a dodecahedron using a coordinate sliding motion. I then tried by experimenting with four chains of three pentagons. It was fairly obvious that the four parts could be assembled into a dodecahedron quite easily but without interlocking, so they would not hold together. I then had the idea of combining two complete sets of these shapes, nested one inside the other. The three pentagons of the inner group were offset in relation to the three pentagons of the outer group which allowed the shapes to lock together. I created several designs that interlocked to form a complete dodecahedron but they were all impossible to solve. At the sixth attempt, I finally managed to print a set of four pieces that could actually be assembled into a dodecahedron with a coordinate sliding motion. The final creative step came when I had the idea of combining the puzzles into a nested set of shapes representing the yolk, white and shell of an egg. Can you crack Plato’s egg and put it back together? 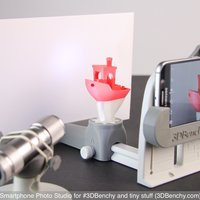 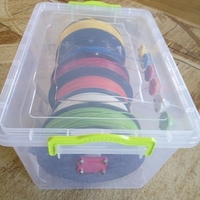 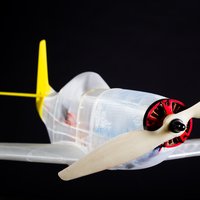 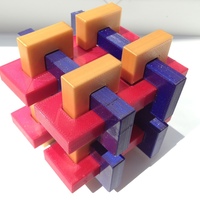 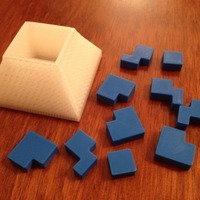 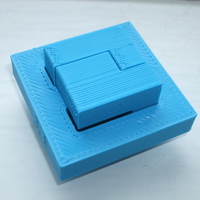 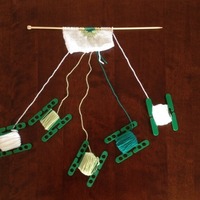