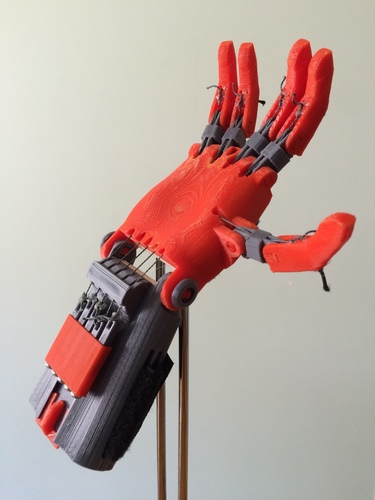 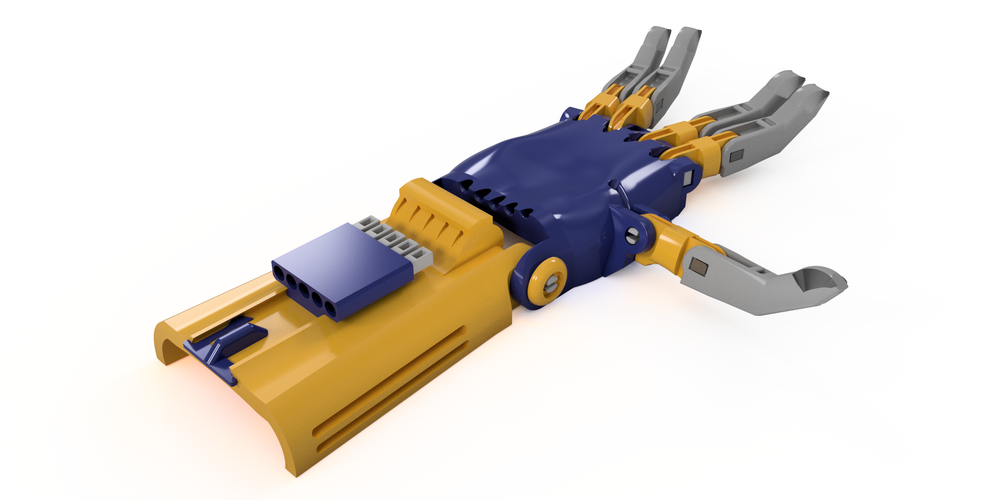 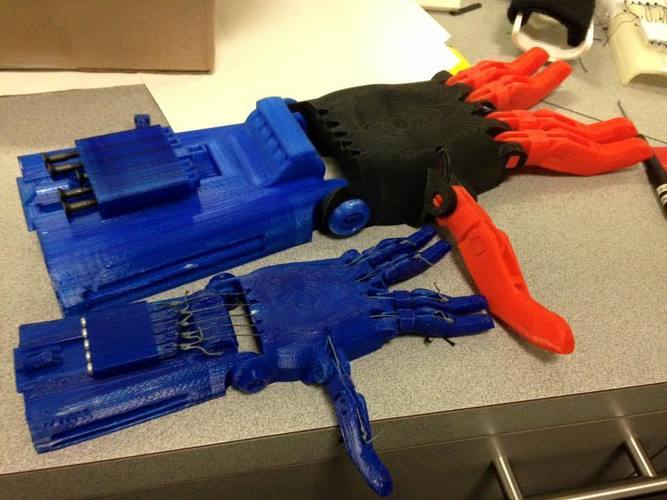 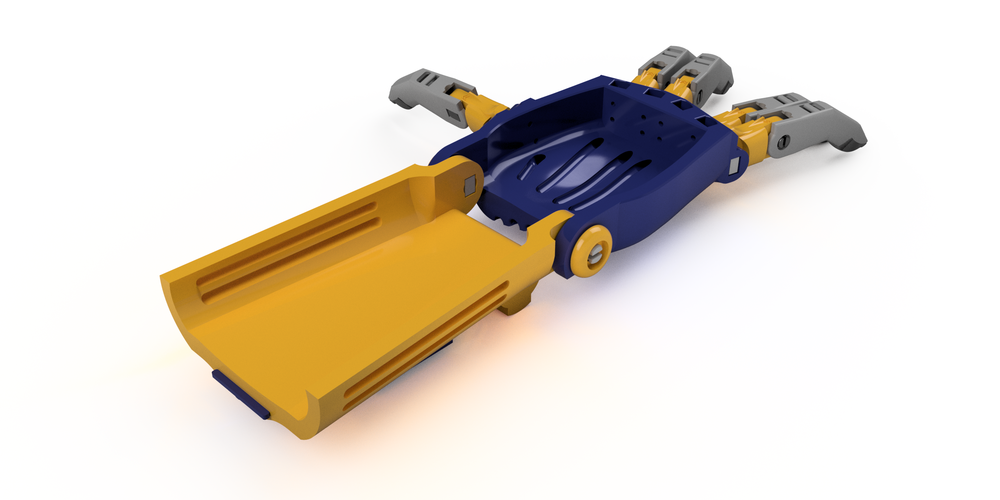 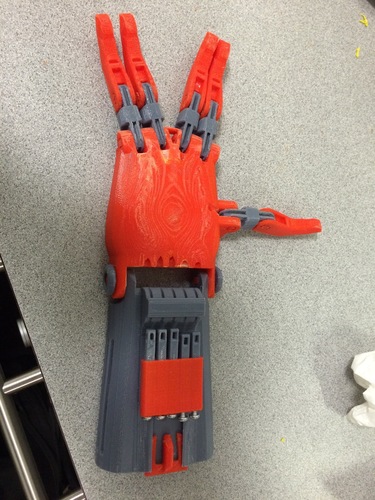 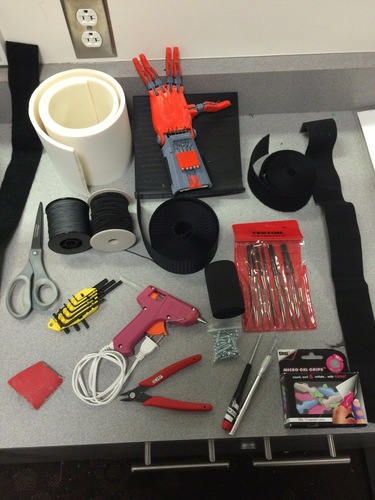 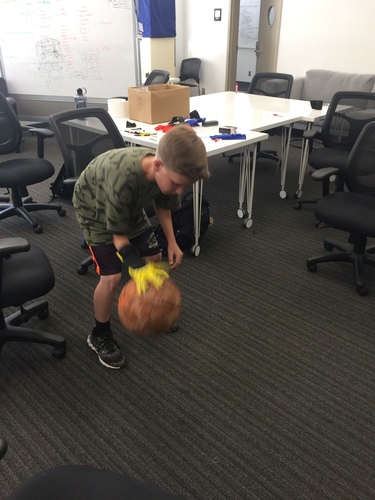 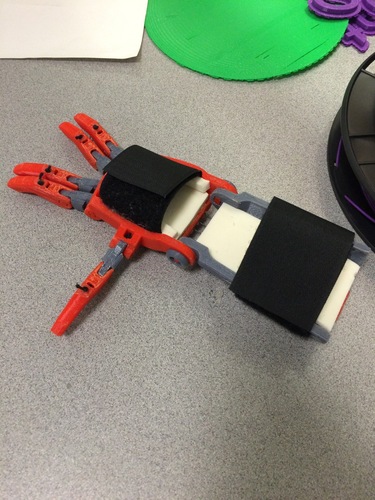 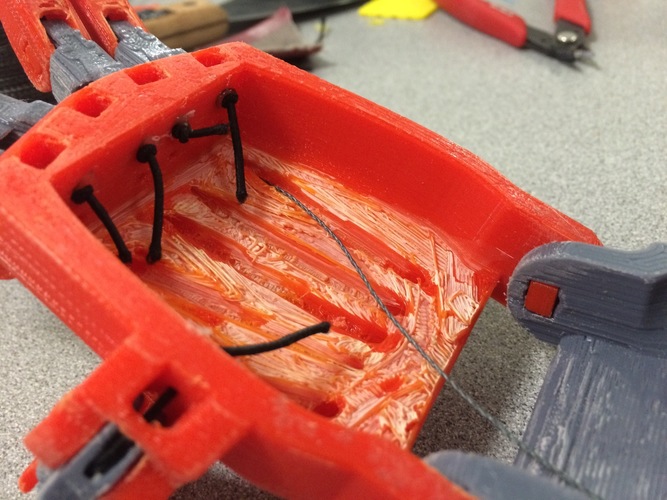 The tendon-driven Spock is a 3D printed prosthetic hand that enables users missing a hand to grasp, dribble, and shoot a basketball. While the base design of the hand depends on wrist motion, the Spock can also be modified to assist those without a wrist.

Our club, 3D for Everyone (3D4E) at UCLA, was inspired by the open source e-Nabling the Future's Raptor Reloaded prosthetic hand, which allows the operator to grasp objects by bending the wrist forward. We realized there was an opportunity to help children missing a hand who want to participate in athletics. The Raptor Reloaded design, however, only performs a forward-grasping motion, which is not appropriate for sports like basketball. By designing the Spock, we could break through these limitations. Our contribution to the open source prostheses movement will encourage enjoyable, healthy exercise such as basketball for those hindered by upper limb differences.

The Spock is a completely mechanical system which combines string and elastic to produce an opening and closing finger mechanism controlled by wrist movement. Individual "tendon" strings are guided from a gauntlet on the wrist through channels on the inside of the palm and up the fingers, fastening to small bars at the finger tips. Since the lengths and positions of the strings are fixed, the fingers curl inward as the user flexes his or her wrist backward, helping to grasp a basketball in the standard set position of a shot. When the user extends the arm upwards and flicks the wrist forward, the elastic strings running along the back of the joints cause the fingers to snap back to their original position and firmly push the basketball forward and upward while shooting (or downward while dribbling). For those missing their entire hand, a single two inch wide elastic strap can be wrapped around the wrist joint to help mimic the snapping motion.

The Spock was designed on Autodesk Fusion 360 (CAD software). After initial experimentation, we recognized that the tendons would have to be guided along channels inside the palm and wrist to attain the desired smooth function. To imitate the amorphous surface of the human palm, a series of sketched splines were lofted together, and the inside face of the palm was sliced to create the tendon channels. Similarly, sketches were lofted together to form the gauntlet, upon which sat a mount with pins that could adjust the strings to the appropriate tension. The fingers mirror those on the Raptor Reloaded, but they have flatter fingertips and the first joints were adjusted to hyper-extend during the shooting process. Several tests and tweaks were conducted to ensure fluid movement, such as angling the holes in the palm or depressing the inside surface of the palm without compromising structural strength. Once the parts were printed using AIO Robotic's Zeus 3D printer, assembly of the Spock consisted of sanding to widen holes for snug pin insertion and applying acetone to smooth the exterior. We held an initial fitting with our first recipient, and then used his feedback to maximize the comfort of the padding and straps as well as modify the design to compensate for those without hands. 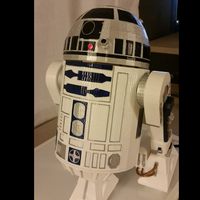 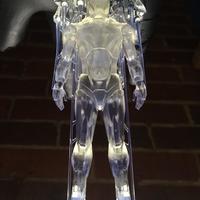 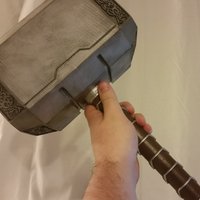 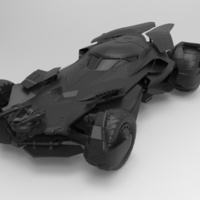 More by 3D4E at UCLA 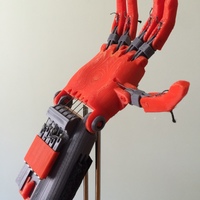