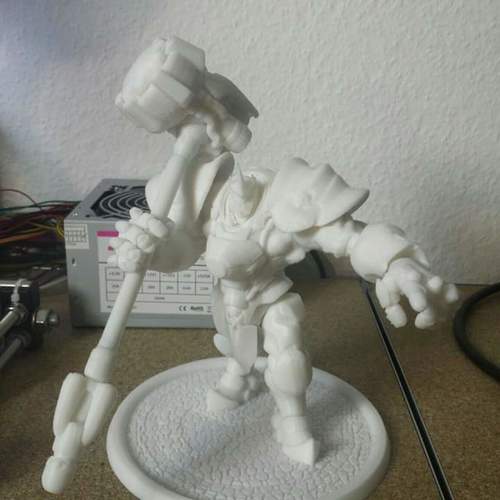 Well, there is so much going on with this model... but lets start with the good things. I liked the the way some of the cuts where placed to allow for a better surface quality, like with the arms. yet there were also some cuts I did not understand. For example the knee pads and even the "bumps" that were cut from the kneepads and several other places. None of that improved the printquality. It only complicated the glueing process. The hammers head is a pferct example of overthinking something. What has been cut in to a dozen of pieces is complicated to print and even harder to glue together. As well as the segmantation of the arms and torso are thought through perfectly fine, there is the problem with all the little plates and "shields" on this model. Most of them are not layed out with 3D printing in mind. After all, now that I have printed the model and can look at it as a whole, it gives the impression that it is simply ripped from the game. Meaning that there are a ton of thin layers floating around fingers, stomach and back, that could have easily been attached to the model to improve the printability of this model, if the model would have been created for that purpose. Last but not least I have to mention the deformations in this model. Fro the looks of it, the model started as something else and has been forced in to this pose, resulting in several parts being deformed. Take the knee pad for example. They have a different size and shape, even thought they should be identical. Same goes for the arms. Lasst but not least, Reinhardts head looks like it has been involved in the mother of all car crashes, leaving his faceplate twisted and bend. So to wrap it all up: There have been a few parts the were easy to print, thanks to the cuts that have been made. Others were not so easy and I would even go so far to say that sme parts require an expert level partcooling system to be printed successfully in the end. Even if this model might stand impressive in its pose, it is nothing for serious collectors, do to all the deformations. 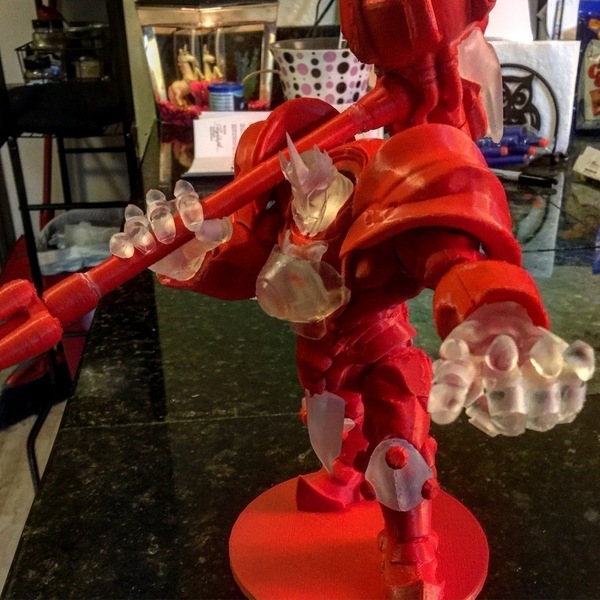