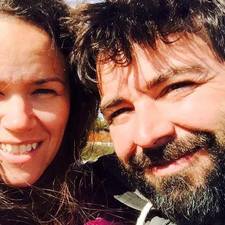 I was born in Chibougamau, a northern village of Canada. I was kind of good at school, especially with sciences and maths. So I decided to keep studying until I got my bachelor's degree. I became a high school science teacher. I've done that job for 5 years, but you know, it a hard job. I take my hat off to those who are able to do it, I wasn't. From my university time to the moment I gave up teaching I've learned a lot about myself, mainly one thing: I'm very good at handy work as well. So I decided to make a 180 degree turn and become a carpenter. Some years later, I needed a little more challenge, so I decided to start my own company. Pythagore (Pythagorean in French) construction and renovation. Being a contractor requires brain and manual work, and I need both in my life. It's the perfect job for me. What brought me to 3d printing? While working on house building, I had an idea to fix a technical issue (I keep it secret because it's still a project of mine to develop this device!) But I wanted to make my concept concrete. 3d printing was the solution. When I got my first one, I kind of got crazy. In 2013, having a 3d printer, I was like an extraterrestrial. I quickly decided to upgrade from 6 to 8 inches. As well as I was going to build a 3d printer for myself, so I decided to seize the opportunity to build 4 more for some of my friends. We built 5 Mendel 90. This was a hobby, but since then, I've kept building 3d printers, selling them locally. As I often wanted to bring my printer with me, I looked at some portable designs like Foldarap... But from my point of view, it is a complex assembly, it's expensive with aluminum extrusions and it looked exposed and fragile. So I had the idea of building a mendel 90 inside a foldable box. It was a simple and good idea, but the case was huge and heavy! This still was my biggest Thingiverse success, so it motivated me to restart the design from scratch to make it smaller, lighter and easier to fold and unfold. This was a big challenge, but I was in it with passion. This is probably one of the things I'm proudest of in my whole life. Like my job, my hobby requires brain and manual work and this is why I love it so much.