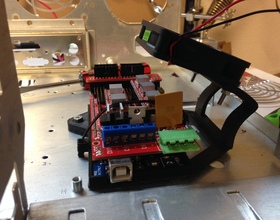 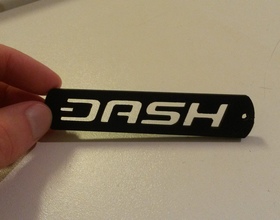 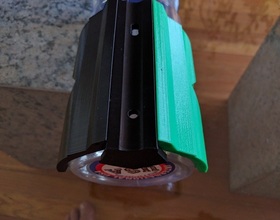 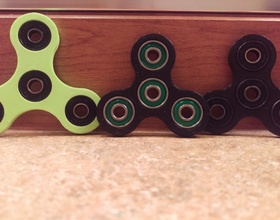 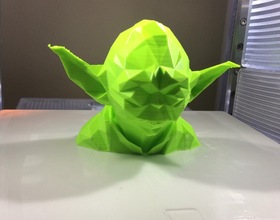 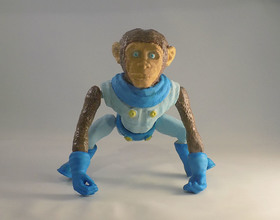 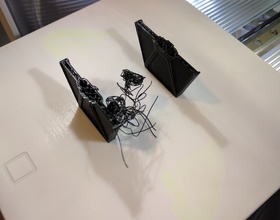 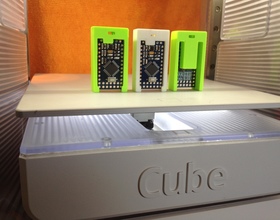 Many of my STL files gave a BAD FILE message. I finally figured out that all it took was one inside-out part or some extra lines in the model. The Cube3D VERY unforgiving about STL files. I suppose if I bought their software, this might not have been a problem. Another problem was that bad STL files caused the printer to put dents into the plate which caused a couple of my expensive plastic reels to break. But most annoying of all was that the reels would strip the plastic where it is being pushed though. And taking them apart to fix the problem was incredibly time consuming. The little magnets which specify the reel type would fail too. And the wi-fi would disconnect often. And the unit would turn on by it self from time to time (probably because of the software running on my Mac would turn it on).

To make matters worse, they discontinued the product after only being about a year old. Seriously? What's wrong with you folks!!!

Overall, I think this printer tried too hard to may it Easy to use and instead, caused nothing but problems where I had to second guess the software developers just to get around their not-so-friendly software.

It could be a good 3D printer!

Just if you don´t have other option or live in the USA...

Costs outside USA are very high and quality of printing and configuration could be much better.

An attempt at a consumer level 3d printer, missed the mark, thus why discontinued

I am new to the 3d printing/build community, this is my first 3d printer. Had this machine about a month now, so I don't have a long term impression to provide, but I can give impressions so far. First, the machine seems well built, and the user interface, while overly simple, gets the job done. The inclusion of auto-leveling and Z-gap setting is pretty cool, as long as it sets them correctly. Their slicing software seems ok, but I don't really have anything to compare it to.  They designed the Cube3 to be a consumer level machine with simplicity, reliability and ease of use in mind - they missed, badly, I would not recommend this to someone that is not mechanically inclined, patient, or willing to research how to deal with some common issues most 3d printers have.

Lousy firmware. Auto z-gap setting incorrectly. I have nozzle indentations in my print pad from it running the print bed up too high. This also caused major failures of prints and nozzle clogging, which in turn also caused their cheap and brittle  filaments to break in the cartridge, requiring partial dismantling of the cartridge to get the broken filament out of the nozzle and feed tube.  Since I have started manually setting the gap I no longer have that issue. Also, when you select your filament color and type in their slicer software Cube Print you have to make sure you select which side of the printer the cartridge for that filament is installed on. If it is incorrect when you go to print the file it will give you an error and won't print it. For some reason the firmware is not smart enough to recognize the correct filament cartridge is mounted on the other side of the machine. So you either have to rebuild the file, or do their drawn out cartridge replacement utility, which also wastes filament.

Filament system WAY too expensive. 3d Systems filament used for the Cube 3D is not very good according to a lot of online forums and reviews I read, especially for the price.  I have had numerous issues with the filament, and have read all kinds of things about humidity affecting it, especially the PLA. I have invested in vacuum seal bags and dessicant cans to keep the cartridges stored in. I have noticed that their PLA does not adhere well to itself once the below layer starts to cool. This is especially an issue with the layer laid down first, as the Cube 3d print pad is not heated at all. Now that they have discontinued the model, finding replacement cartridges for it is going to get difficult soon, and presumably more expensive, even if ordering directly from the 3d Systems website. I intend to refill the cartridges myself when they run out, and with better quality filament. Hopefully that works well.

Overall an ok machine, if you can figure out its quirks and get it to cooperate. I have only dealt with their support via email thus far, but they seem very interested in assisting.

Fairly easy to use....medium quality prints. I use mine for Telescope parts, generally medium to large pieces with basic geometries.  For this the Cube 3 is phenomenal.  For small, intricate and complex pieces this is not a good choice.

Now that they are discontinued I got mine new for under $200 so at that price it deserves 5 stars.

It's a nice little printer once you learn how to fix feed problems, there are some good tips on youtube.

Pretty easy to set-up and use. Print quality is good. Good value for the price. Replacement cartridges are a bit pricy.

frustrating.. cartdriges are expensive and get clogged all the time

its overall pretty good printer but there support line is very upsetting and just trying to get any kind of help with this thing is like trying to find someone you dont know.

Stay away from Cube printers

3Dsystems exited consumer 3D printers. The Cube series were great looking printers an easy enough to operate - especially for 2 spool printers, and with great print resolution. The faults - were cartridge based spools which constantly break and have to be dismantled to use - and now 3D system has exited the market - these are hard to find.. Any printer that has to move the print bed around rather than just the print head creates too many issues - so no precision of parts. The printed supports on this printer were far too over the top - resulting in models that were just not useful - having to cut away over half the material output is just wasted.