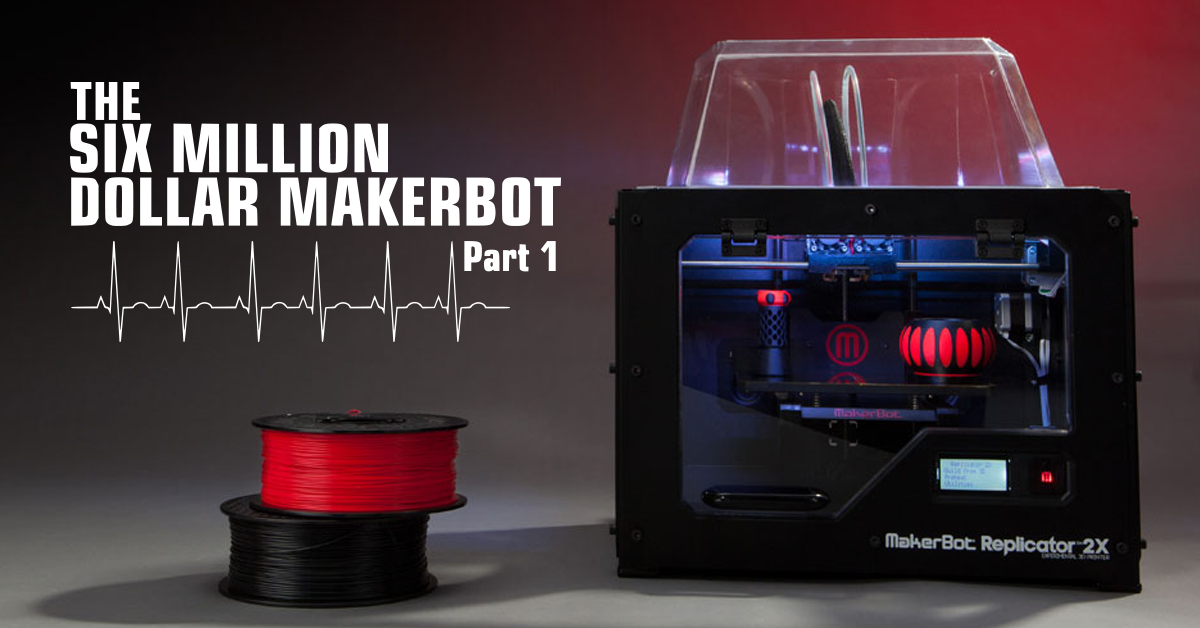 If you’re new to 3D printing but are looking for a few simple ways to improve your printing results – Pinshape contributor Brett Turnage walks us through the process. In this article he goes through adding a layer cooling fan and tools for better first layer adhesion.

I’ve always felt that one of the most powerful TV show introduction was the 6 Million Dollar Man and its famous slogan “We can rebuild him. We have the technology. We can make him better than he was.” Well this article is about taking a store bought 3D printer and making it better and more reliable by replacing parts, adding new capabilities, and turning it into a workhorse—a cyborg if you will.

A Little Modification Can Go a Long Way

If you have read my previous articles on printer controller boards and 5 top tools for 3d printing, then you have heard me talk about adding products that can make your 3D printing life easier. This article will chronicle how to make modifications using the tools I’ve talked about before. All of these modifications will be done on a store bought printer, and you will see the benefits or the changes that resulted from the modifications. For this article, I will go through upgrades that anyone with little knowledge or expertise can complete without dismantling anything on the printer.

Our subject: The Makerbot Replicator 2x 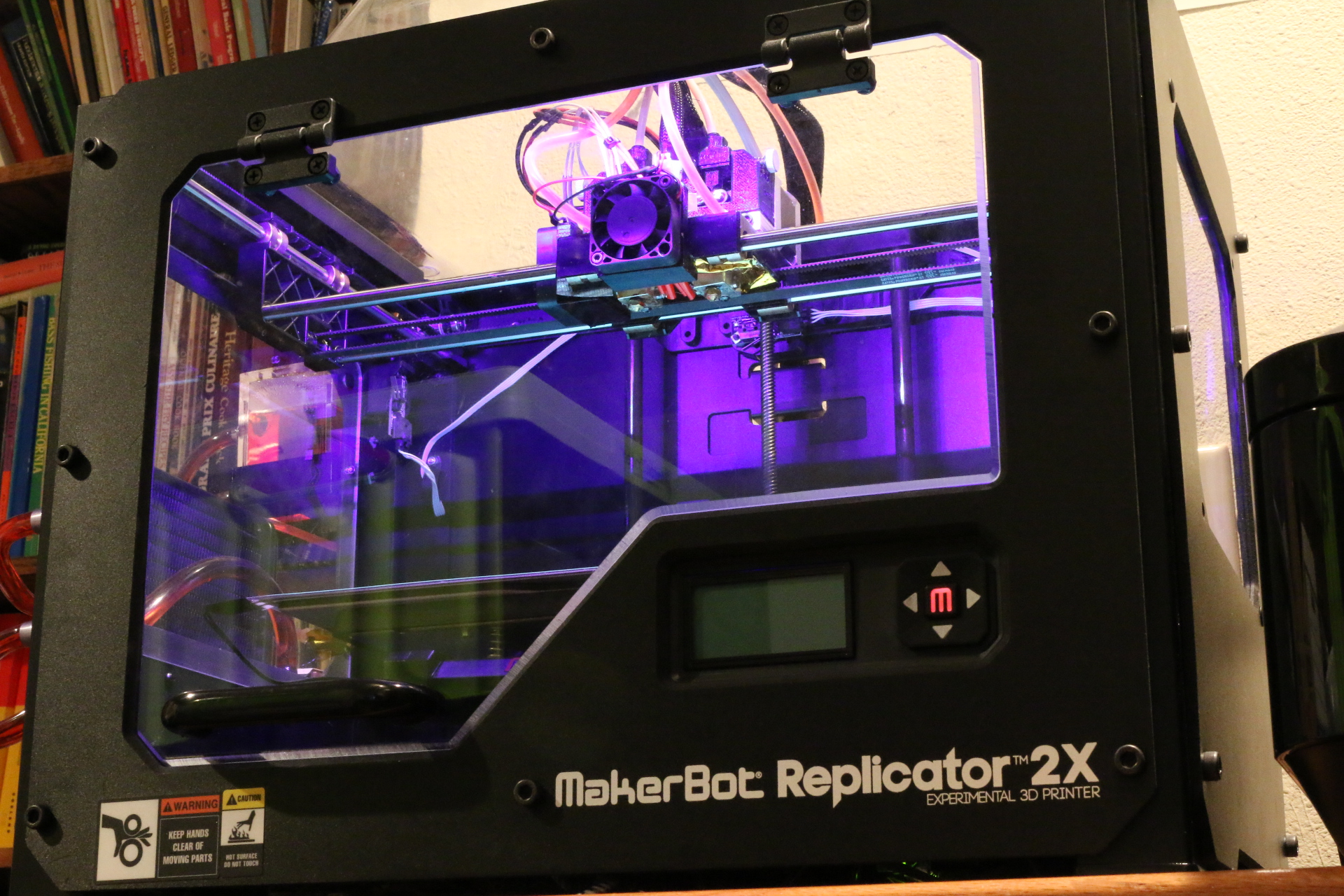 The 3D printer we’re modifying is a relatively brand new Makerbot Replicator 2x, bought with only 30 hours of use. The Replicator 2x is sold as “experimental” because owners need to tinker with it to get it to work. It is also sold as an ABS only printer. This is a closed source machine meaning that everything from the electronics to the hotends are Makerbot specific items. It comes with a heated bed, enclosed windows and a plastic top, and it runs on 24v power. It offers dual extrusion, so it has two hotends which gives the option to make a multicolour print.

Deciding What Changes to Make First

I’m a big fan of using PLA because it has a more pleasant aroma when heated. In an enclosure, I cannot even smell it. I also like the fact that PLA does not warp as much as ABS, and when you are building large parts, warping is a huge problem that can quickly ruin a print.

Despite the ABS only claim, any machine that can print ABS can also print PLA with some modifications. To test it out, I pulled out the ABS, and replaced it with PLA to do some test prints. 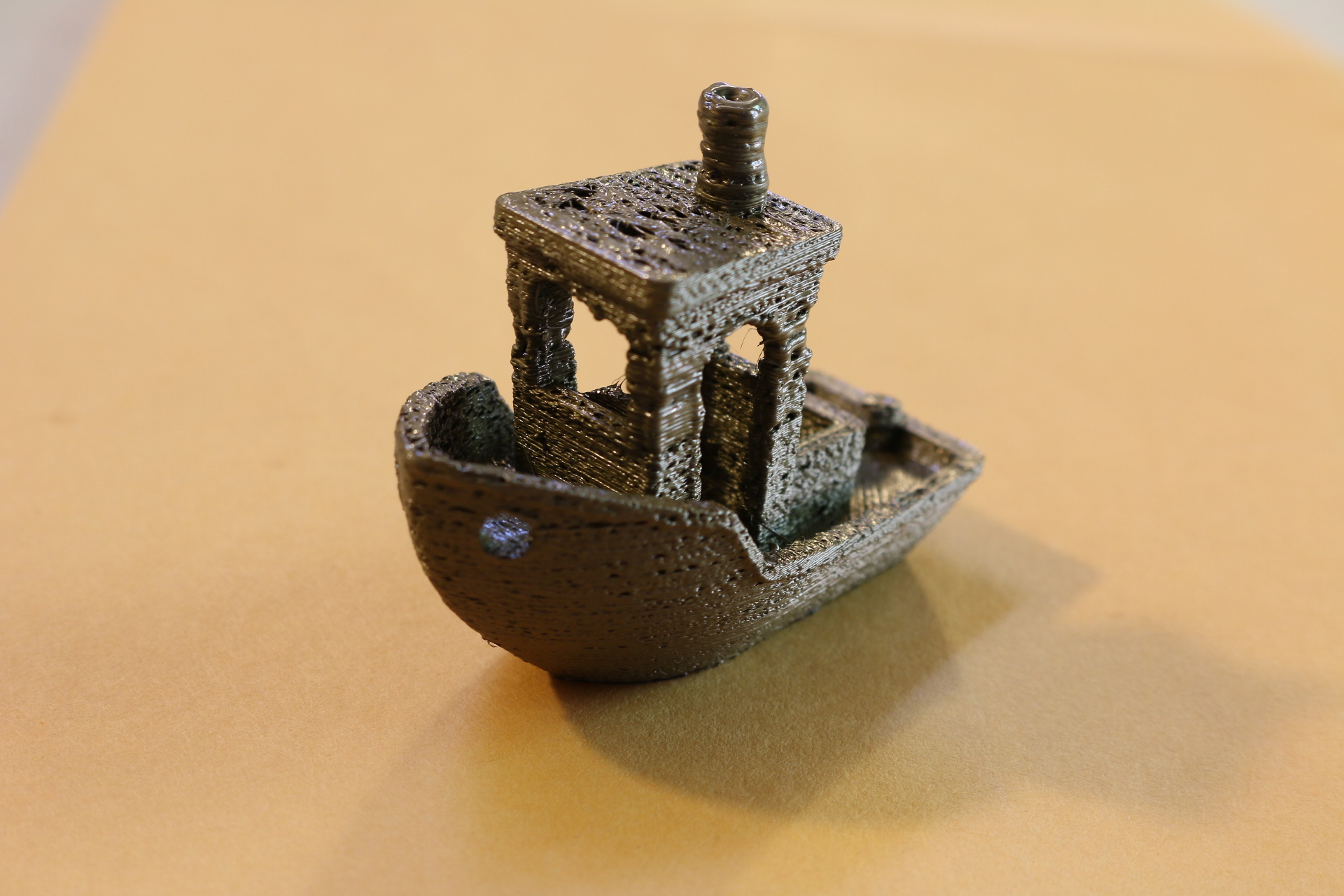 The first test prints left a lot to be desired. The print had holes in it from under extrusion and there was poor bed adhesion. I had to use tape on the bed to make the print stick (not ideal), and getting a good first layer was tricky. The cooling setup had lots of room from improvement. Perhaps with the Makerbot ABS filament, the holes would not have been there. To get PLA working, I needed to calibrate the extruders or increase the extrusion multiplier in the slicer software.

Reading reviews on the Makerbot 2x, I read about the usual suspects that cause failed prints:  hotend clogs, extruder issues—nothing new. Almost all printers have these problems. Many owners complained that they had trouble switching to PLA, some even said it was particularly bad at it.  There was only one thing that came to my mind when I thought about improving this printer: “I can rebuild it. I have the technology. I can make it better.”

Printing PLA sometimes requires a layer fan to cool the filament as it is laid down. Unlike ABS, PLA will droop and look messy if it is not cooled immediately after it is extruded out of the hot end. A layer fan is simply directed towards the nozzle and cools layers as they are deposited. Directing the air is important because you want it to blow on the print, and not on the heater block. Any air blowing on the heater block can cause the hot end to struggle to hold a consistent temperature.

There are many layer fan designs out there but I like to build my own parts. I designed some simple ducts that are attached with automotive double stick tape. I wanted them to be easily removed, and not attached to the extruder system, so they would not get in the way if I needed to remove the extruder assembly. 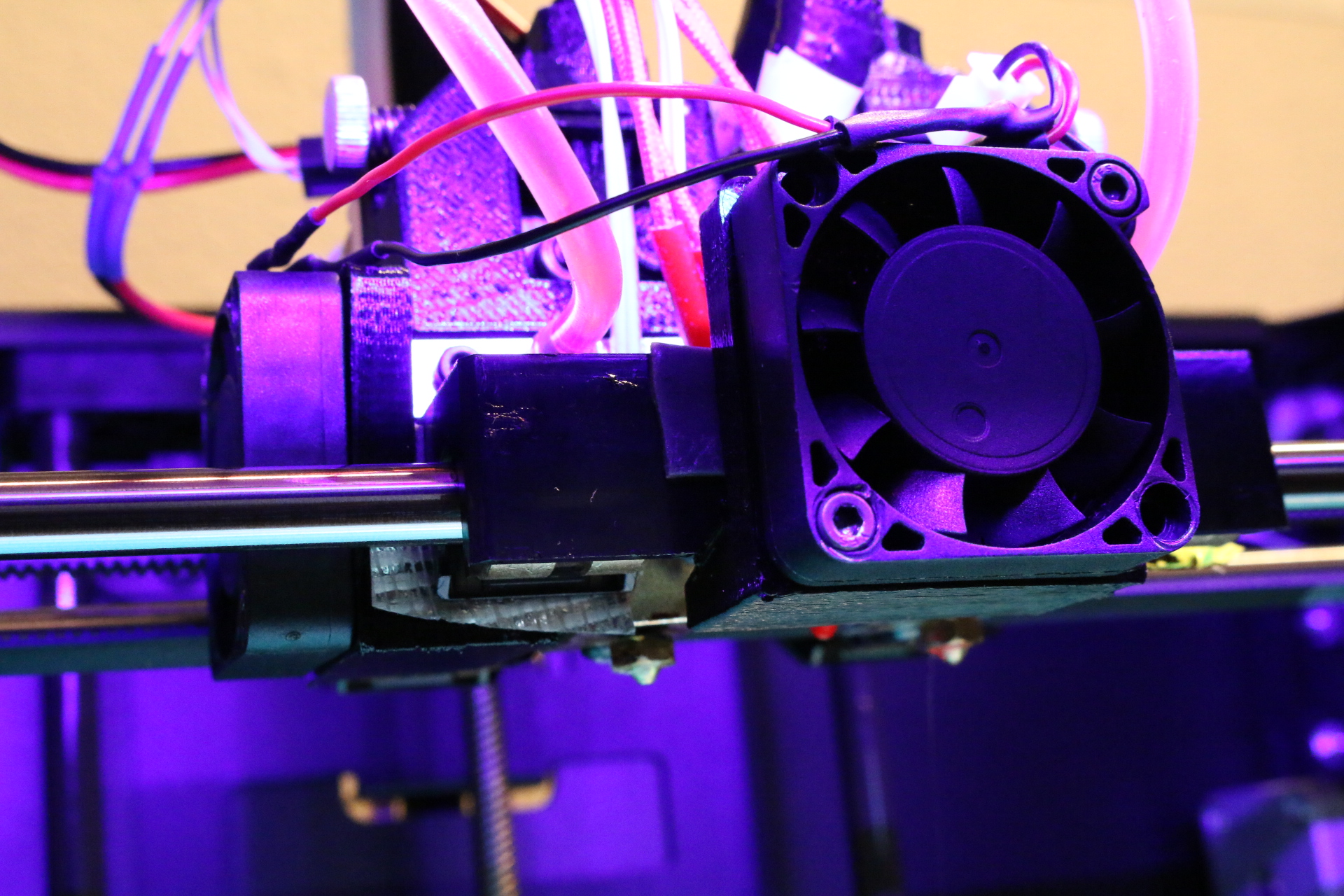 I added two fans, one in the front and one on the side. Two 40mm fans that are angled at 90 degrees help to spread air across the entire part.

This additional airflow prevents any filament from drooping which may happen when features in a design block airflow to other parts of the model. I had a particular problem with this cooling abstraction with the 3D Benchy, where one side of the boat was cooled and looked clean, where the opposite side had some messy areas because the shape of the hull was blocking airflow. 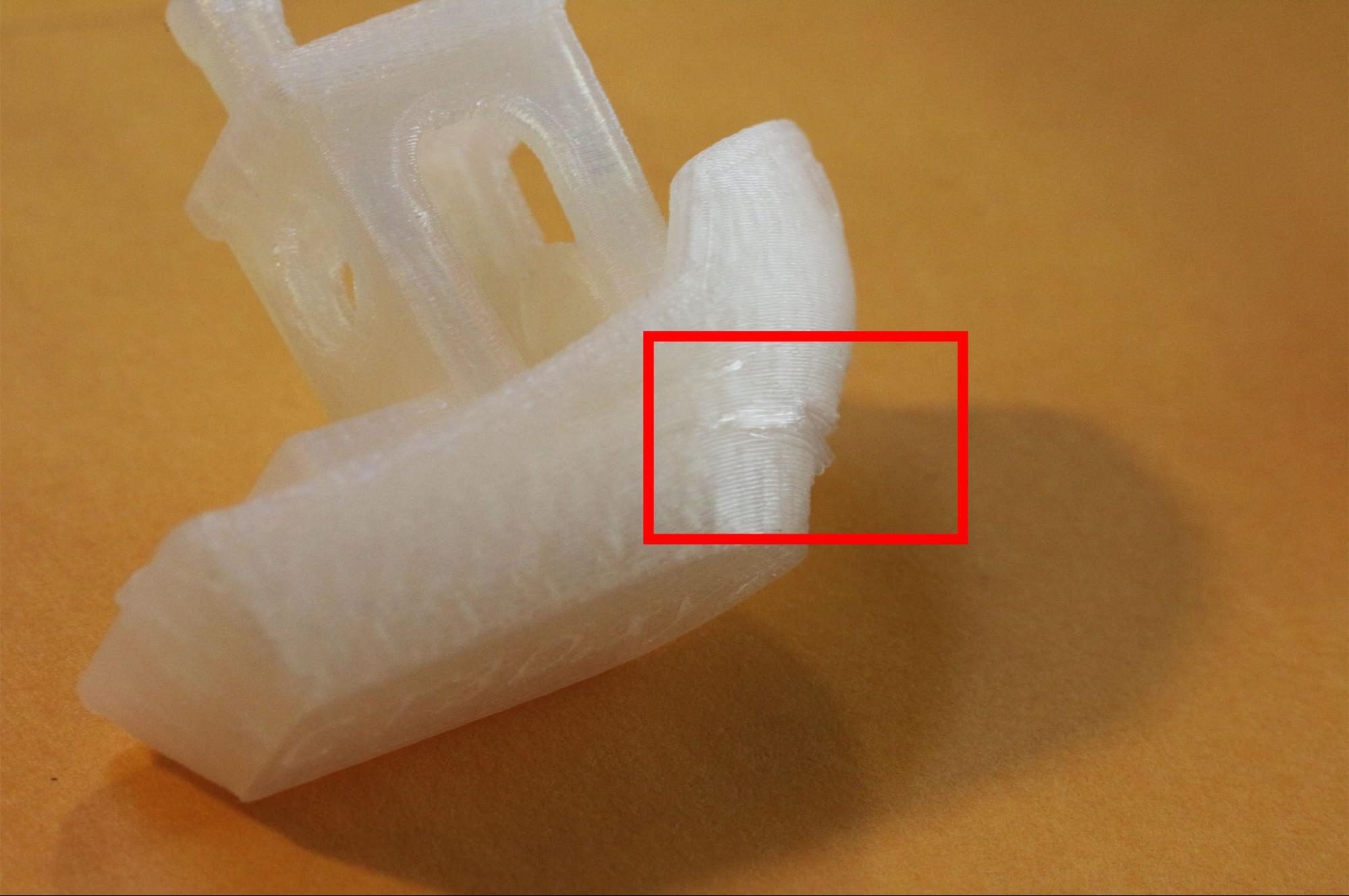 After adding Layer fans, the hideous dropping prints was replaced with solid clean layer lines. I think pictures best explain the result of layer fans. As you can see, the prints go from messy to clean. 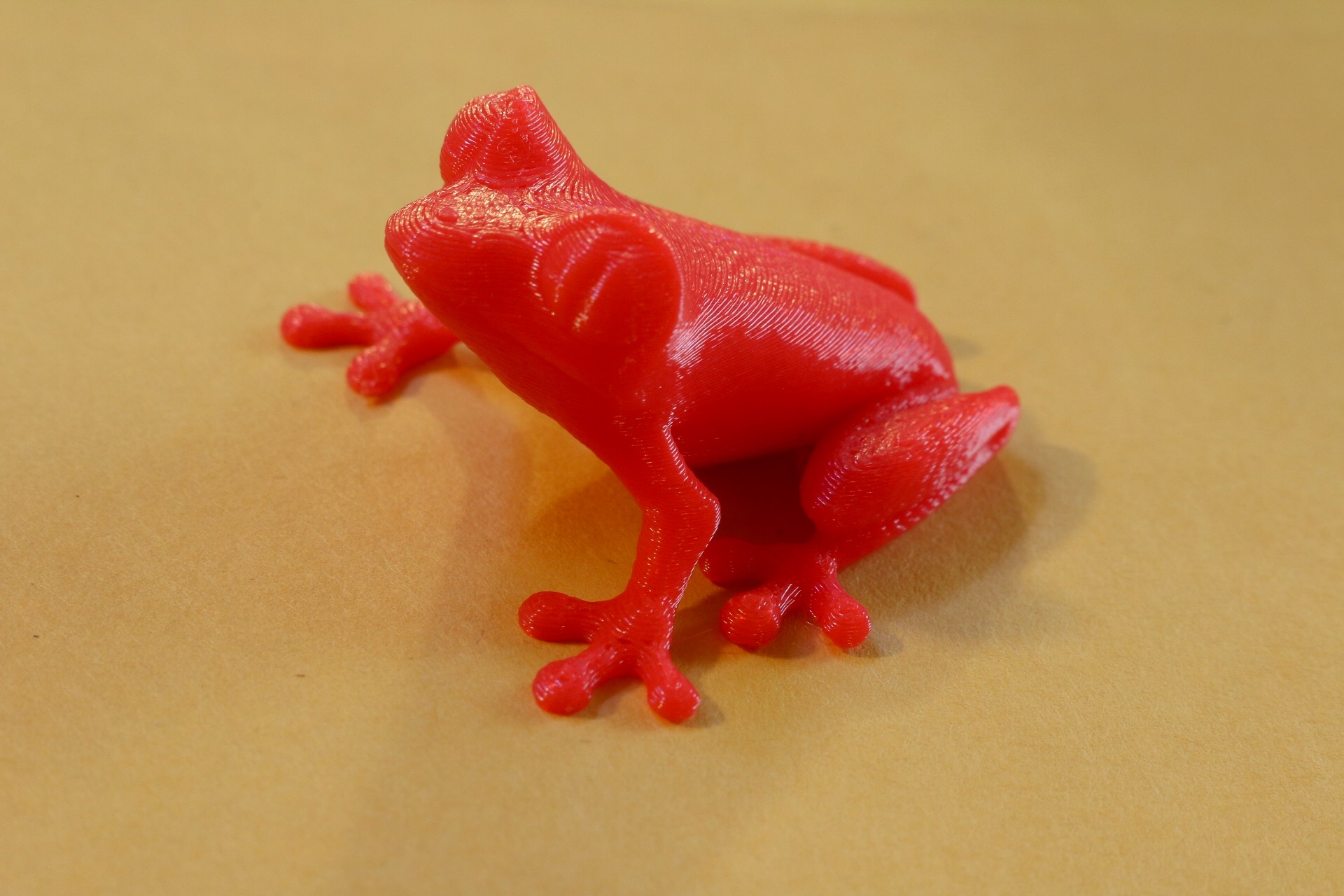 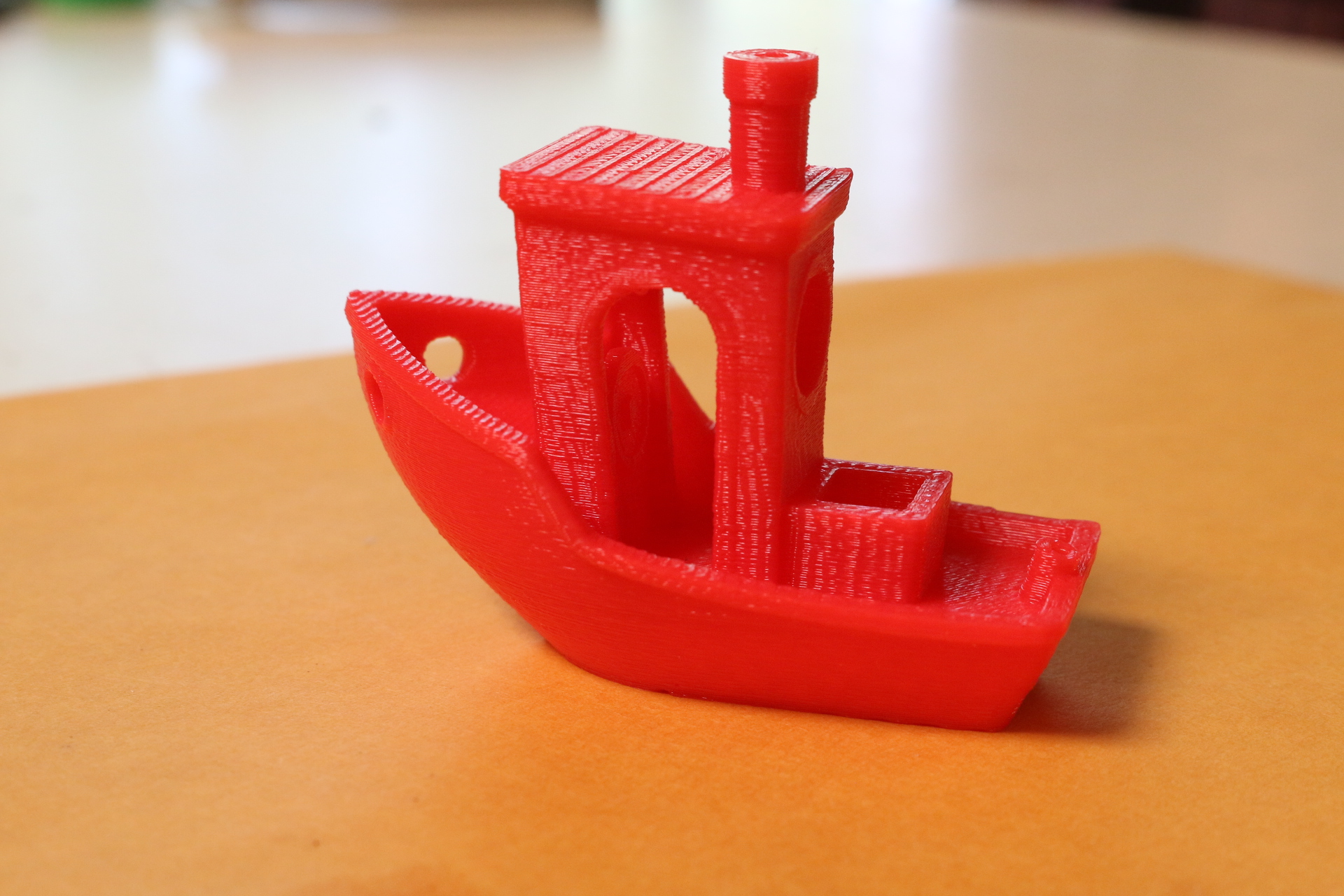 Adding PLA is a great addition to my Makerbot. The fans, hooked into the Makerbot power supply, are always on so there is no smart fan controller available in the g-code via the slicing program, but it works and I can now reliably print with PLA and get amazing prints.

One of the biggest challenges that I’ve had with this machine is the bed. This is surprising to me because of how crucial a good first layer is which relies on the bed. In 3D printing, the first layer is your most important layer because it is the foundation that all subsequent layers will rely upon. If it is messy, then it will create a bumpy first layer. If it is not adhered well, then it may become dislodged later in the print. If it’s too tight, the filament might back up and cause a clog. Makerbot offers painter’s tape and kapton tape which need to be replaced frequently. Nowadays, there are many other consumer adhesion tools for printer beds.

There are two categories of 3D printer beds: heated and unheated. This is important because the unheated bed accessories will warp if you place them on a bed that sees 60C-110C. 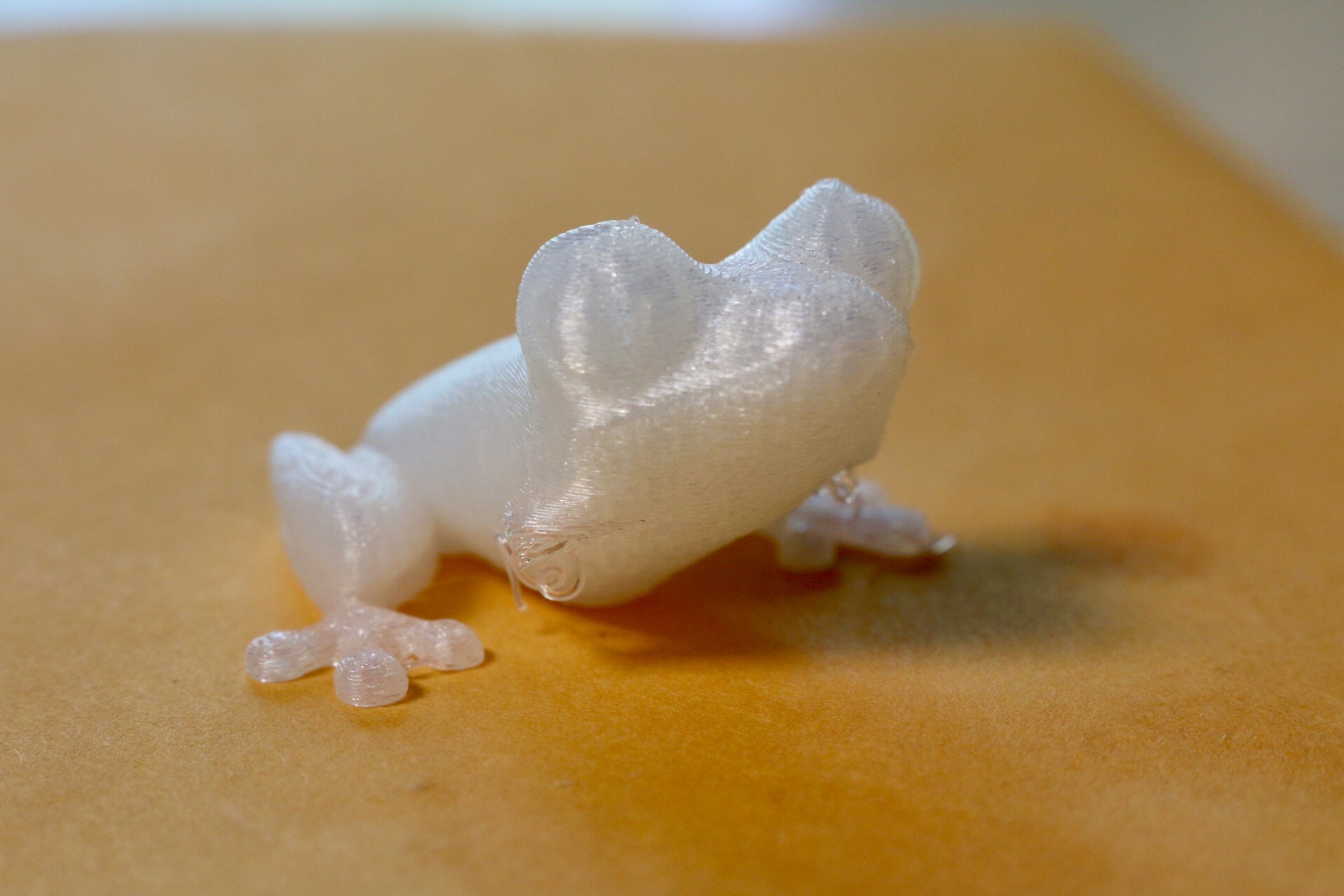 Treefrog that lost its front legs due to poor bed adhesion

Other factors to look at when choosing a bed material is what filaments does it work best with. Some materials like Nylon may not work with all beds, so look for the bed that works with your favorite materials. A great material that I did not talk about in my 5 top 3D printing tools article is PEI. It’s a great printing material that works well with a variety of filaments and a major benefit is the shiny bottom finish that it leaves on prints. 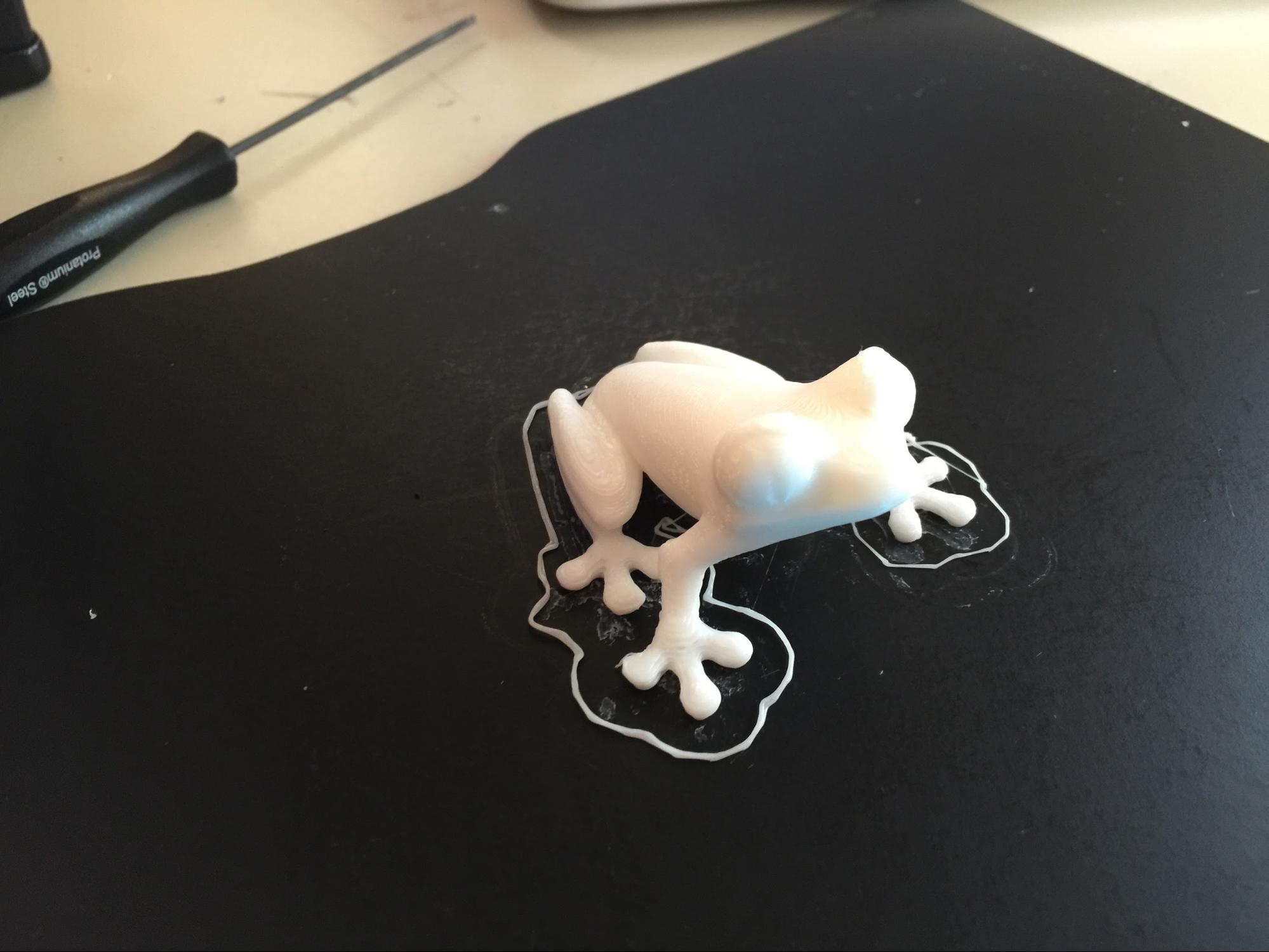 I prefer two beds materials: the Printinz plate (formerly zebra plate) and a PEI plate. I wanted two different beds because I use them for different tasks. I’ve learned that PEI is great for small to medium height prints; however, when things start getting tall, a print can become dislodged. There is nothing worst than a 5 hour print coming loose in the final moments, so for long prints I use the Printinz bed. The Printinz plate leaves a matte finish on the bottom of the part, but it causes prints to adhere so strongly that I typically rely upon its flexibility to release prints. Prints pop off easily when you flex the plate. 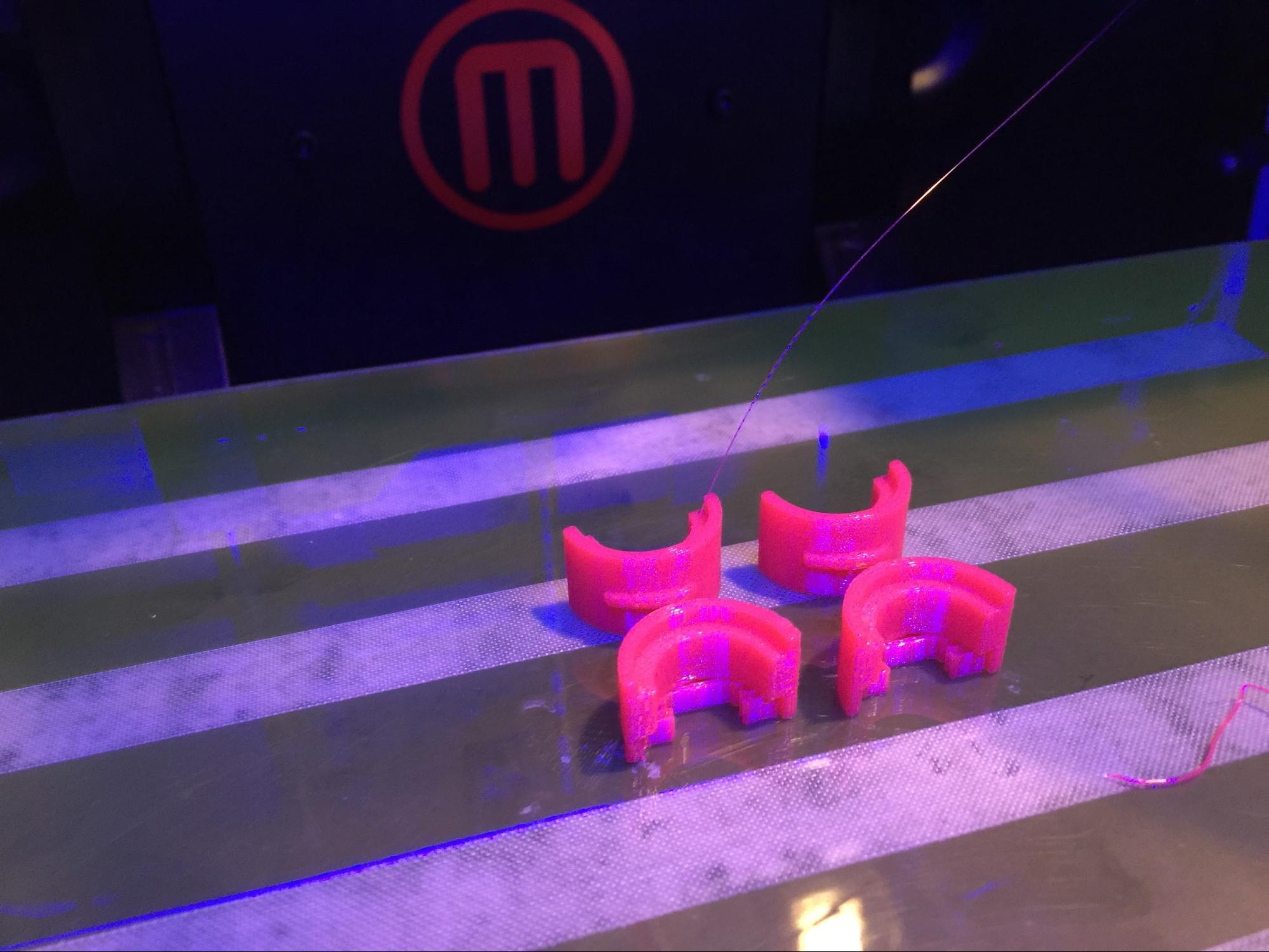 To attach these to the Makerbot bed I used double stick high temperature tape, and I just stacked the PEI on top of the Printinz plate. The tape eliminated the need of bulldog clips, which seem to get in the way of the machines hotends.

So, with these few upgrades, the machine now prints PLA reliably and has good quality 3D printer bed plate material for proper first layer adhesion.  The cooling fan I added will be useful for all types of material in addition to PLA and the build plate material is much less maintenance and cheaper than other alternatives like blue tape.  In the next feature “Part II: We can make him better” I will be replacing and upgrading the hotend cooling system and stock extruders with water-cooling and pre-production Bondtech extruders.