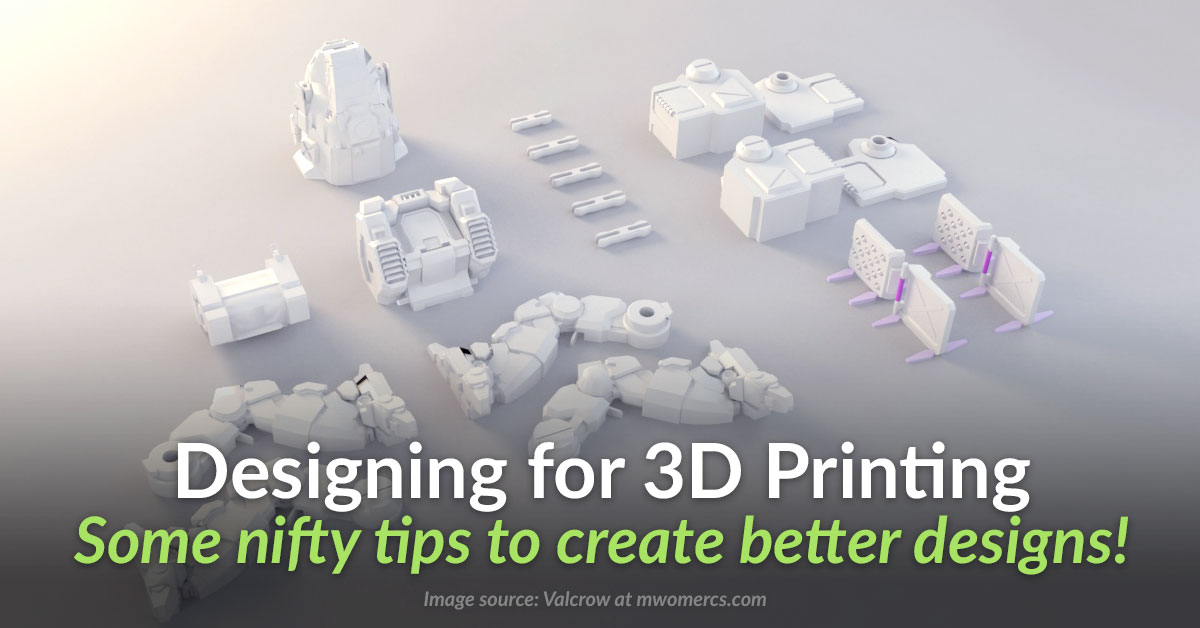 3 Key Tips on 3D Robot and Toy Design from MechaZone!

This article is written by pro illustrator and toy designer David White who created the MechaZone toy robot series.  He will share some of the design tips and tricks he’s learned from his experience as both a 3D designer and maker.  Keep these pointers in mind when you design for 3D printing and you’ll be well on your way to creating great toy designs that print beautifully.

3D printing has been around for a long time, but only recently has it become available to the general public. My friends and family still think of a 3D printer as some sort of miracle device that can make whatever you want at the push of a button. Of course, we as creators know that it takes a lot of work to go from an initial idea to a final 3D printed product.

There was a period of time where everyone was telling me I HAD to make prosthetic hands because I own this futuristic 3D printer and I had a social responsibility to use it for the forces of good.  I think of 3d printers like any other tool such as a table saw or lathe. Sure you can make just about anything, but what do you want to make? I’ve always loved the aesthetic of boy’s action toys so I couldn’t resist the opportunity to make my own action figures. 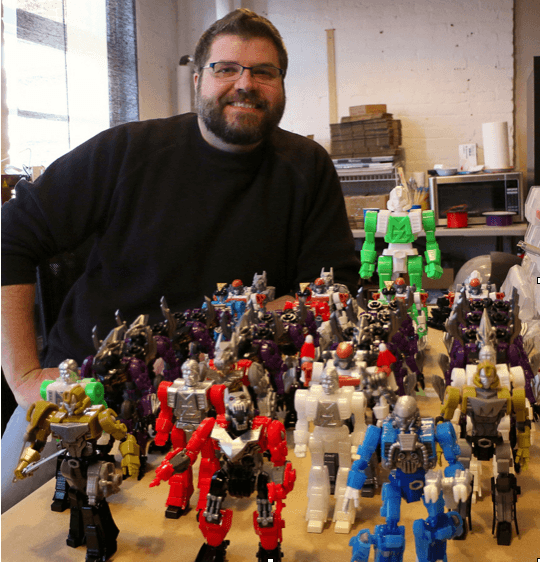 I used to make video games so I already knew how to create low-polygon style 3d models. That set me on the right path to making my first action figure, but there was still a lot to learn about making models that print optimally on an 3D printer. I’ve made hundreds of toys since I got started a few years ago and I would like to share a few tricks I’ve learned through trial and error. If you’re wondering what software I work with, I make most of my models in a free modeling program called Blender.

3 Tips on 3D Robot and Toy Design for 3D Printing

How the plastic of an extrusion style print is deposited in layers gives the print strengths and weaknesses just like the grain in a piece of wood. It’s very important to be aware of this as you model so you can design the parts to print at the optimal orientation for strength and durability. For me, this mostly affects the way I design the joints of my action figures. I use a lot of peg and socket joints as well as a lot of ball joints. 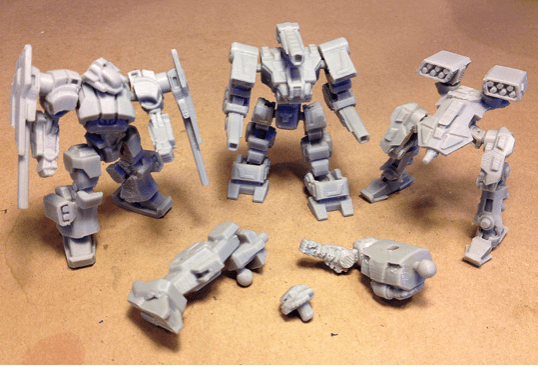 These toys all share the same basic joint structures. I used a peg for the necks and waists. Ball joints were used for the shoulders, hips, and ankles. It’s simple, but gives the figures a large range of poses.

If I design a part with a peg that prints vertically, then it’s almost guaranteed that the peg will easily snap in half.  It is always best to print any pegs or pins horizontally so the grain runs the full length of the peg. This isn’t always possible if the peg is part of a larger part so I often print the pegs separately and glue them into the larger part.

In the picture below, you can clearly see the layer striations, or grain. Pay close attention to the ball pegs… the grain runs lengthwise to make the parts stronger. 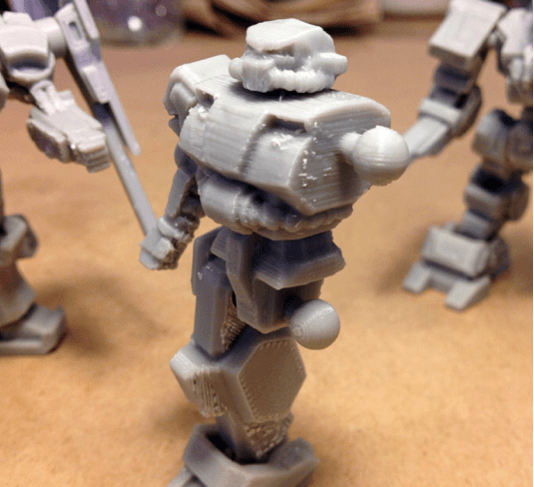 This same concept should also be applied to the peg receptacles to prevent the part from splitting when the peg is inserted. I know from experience that it is not always practical to print the parts at this orientation. When I can’t print parts at the optimal orientation, then I use a higher nozzle temperature for a stronger layer bond. 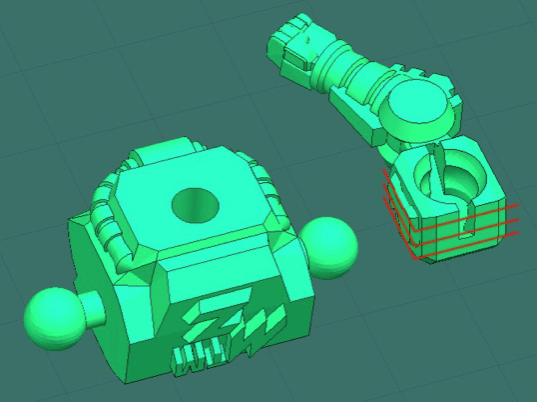 The underside of the torso and arm ball-joint receptacle.

I make dozens of toys at a time for online sales so it’s important for me to be able to clean off the support material as quickly and easily as possible. Less support material also means the surface of the print will be cleaner and smoother. My printer, an Afinia H-480, automatically calculates the support material based on the angle of the underside faces relative to the print platform. Sometimes you can design a part so it doesn’t need any support material, but most of the time a part will need some kind of support structure.

A lot of my parts are very angular and boxy with shapes like 90-degree stair steps. These shapes always need support material when they are on the bottom of a part. I’ve found that it’s often possible to adjust the stair step angles so the bottom surface is at a gentler angle like 30-45 degrees. This can make it easier to remove any needed support material or eliminate the need for it all together. Below is an example of a step that has two different adjustments which reduce or eliminate the need for supports:

3) Add a slight concave angle to flat surfaces with rafts

Flat parts can be very difficult to remove from support material and printing rafts. I use ABS plastic because of its durability, but it is also prone to warping as it cools. Because of this, I need to use a support raft to keep the parts flat. Parts like the bottoms of feet can be time consuming to remove from the raft without a lot of effort. I’ve found that this can be remedied by adding a slight angle to the bottom faces. Another solution is to add some sort irregularity or texture to the bottoms. 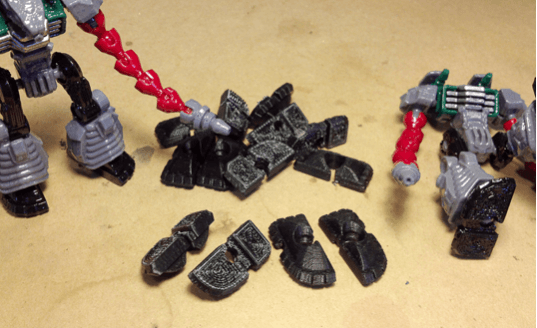 This action figure has large, flat feet and I found I was spending a lot of time with a craft knife removing stuck-on bits of the support raft. My solution was to add a concave area to the bottom of the foot.

As you can see from this screenshot of the model, I left a flat area around the edge so the part would not dislodge from the support raft during printing. The slight concave shape made the rest of the support raft detach easily and saved me a lot of effort during part cleanup.

I hope you find these tips helpful when creating your next toy design. Keep them in mind the next time you are designing and modeling or integrate them into your existing models.

Questions? Comments? Leave them below!

If you want any clarifications or have any design tips to add, leave a comment below and let us know! If you’re interested in purchasing a robot that’s already 3D printed, check out David’s Mechazone website or if you want to purchase his design files, check out his Pinshape page. 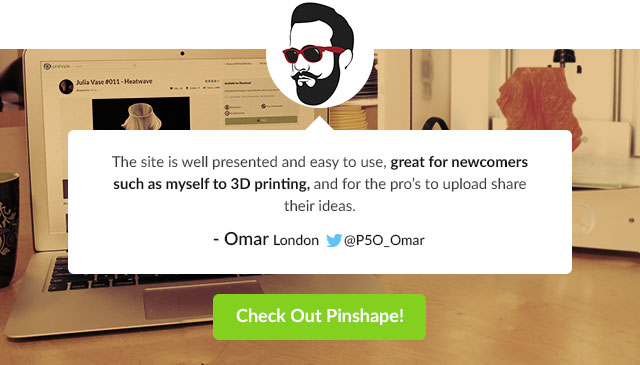