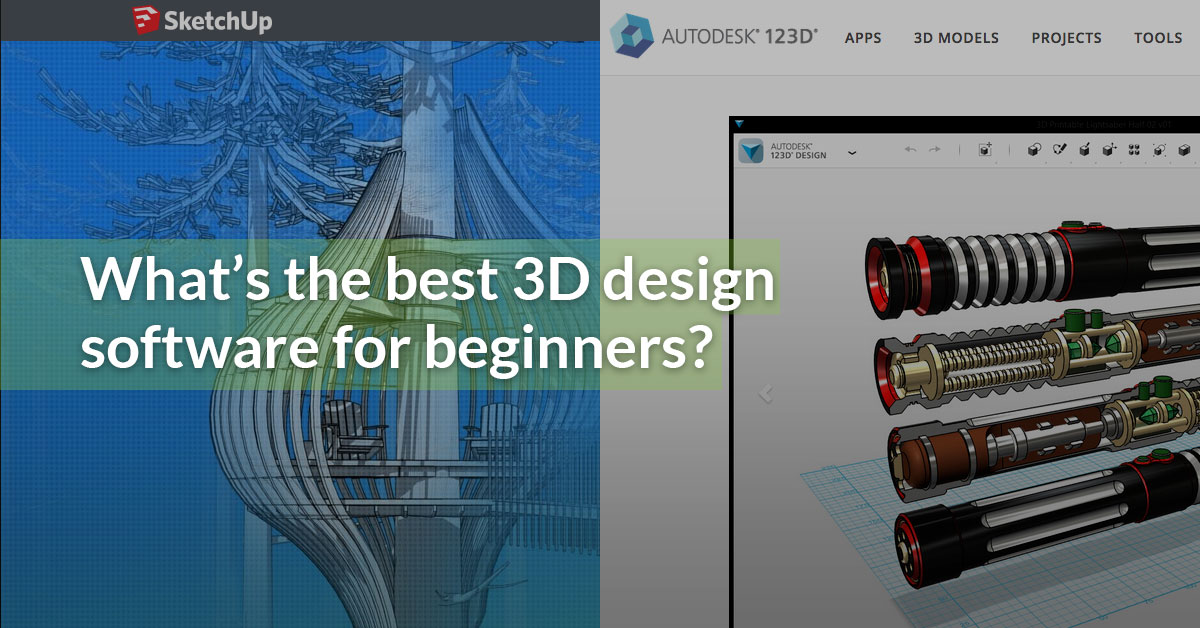 You may have seen Lydia Cline’s creations around Pinshape, but did you know she’s written books on 3D design? She’s here today to give beginners a place to start their 3D design journey. She’ll cover basic design software that can help you understand the basics of 3D design, with videos included as examples.

Which design software is the best?

So you bought a 3D printer and are cruising Pinshape for stuff to make. As fun as that is, you’ll eventually want to print your own stuff. Or you’ll want to tweak and customize stuff you download. As a teacher of modeling software, I am frequently asked, “What’s the best software to do this?”

Well, that’s like asking, “What color is a shirt?” There is no best. A better question is, “What, specifically, do I want to make?” Then choose a program that enables doing it with the least effort. A workflow between multiple programs is often the best because different programs have different capabilities. Discussing modeling software in terms of pros and cons is like trying to discuss which is better: an apple or an orange? Let me explain.

There are two kinds of models: solid and mesh. A solid model’s volume defines its form. Think rock. You basically push forms into each other and perform operations on them. A mesh model is hollow with a skin of polygons, or flat surfaces. Think air-filled balloon. The picture below shows a mesh model on the left and a solid model on the right. The mesh was made with SketchUp Make and the solid was made with 123D Design, part of the Autodesk 123D suite of modelling apps. SketchUp makes models like this and Design makes models like this. Both programs are free and great for beginners. 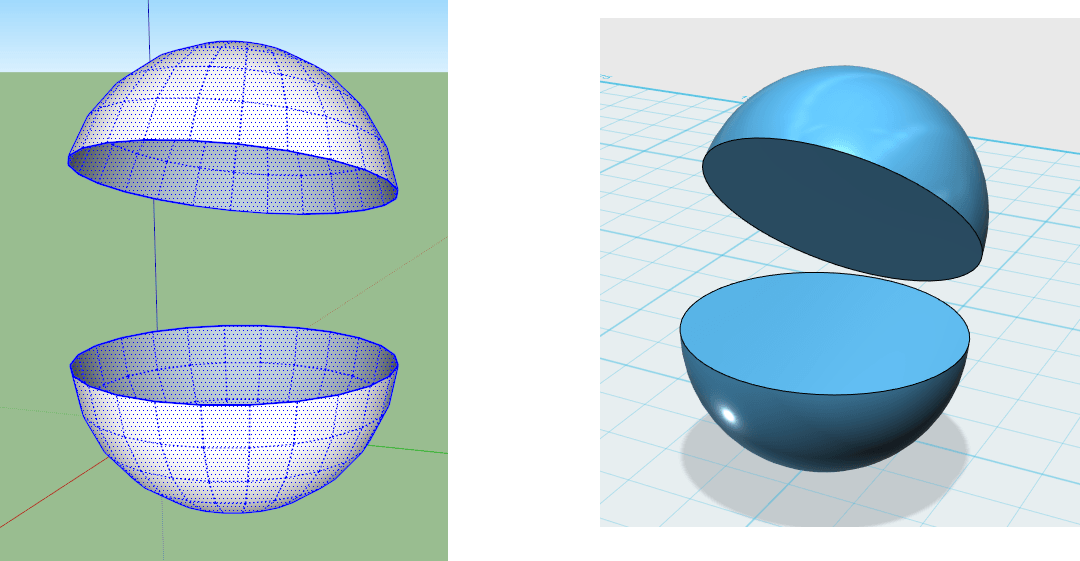 Proficiency with mesh and solid modeling is desirable to get the best of both worlds. For example, you could model Bulbasaur in SketchUp, an impossible task in Design. You could model a torus, which is a snap in Design but laborious in SketchUp. Put them together and voila, a one-of-a-kind ring! Design can also be work-flowed with 123D Tinkercad, another solid modeling program. It has features that Design doesn’t, a significant one being the ability to resize an item after you’ve made it (although the Design team has promised this feature in a future version). 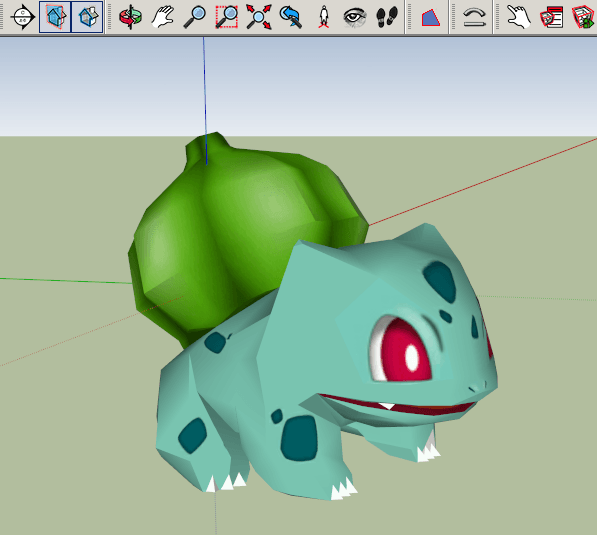 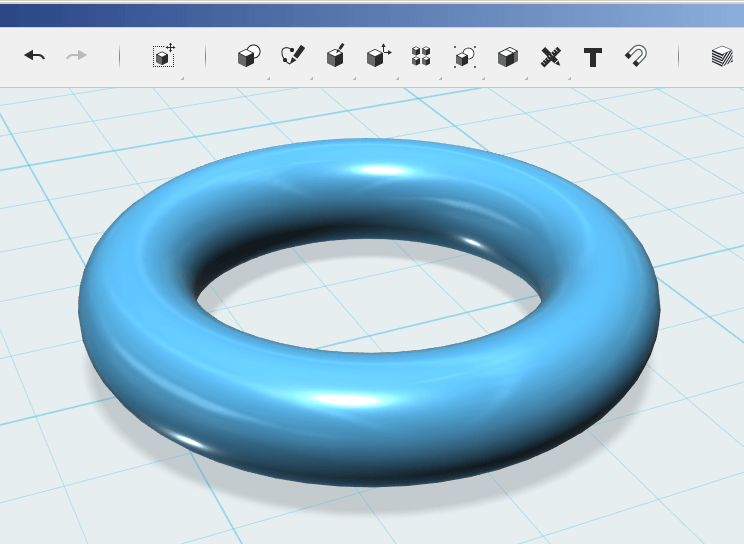 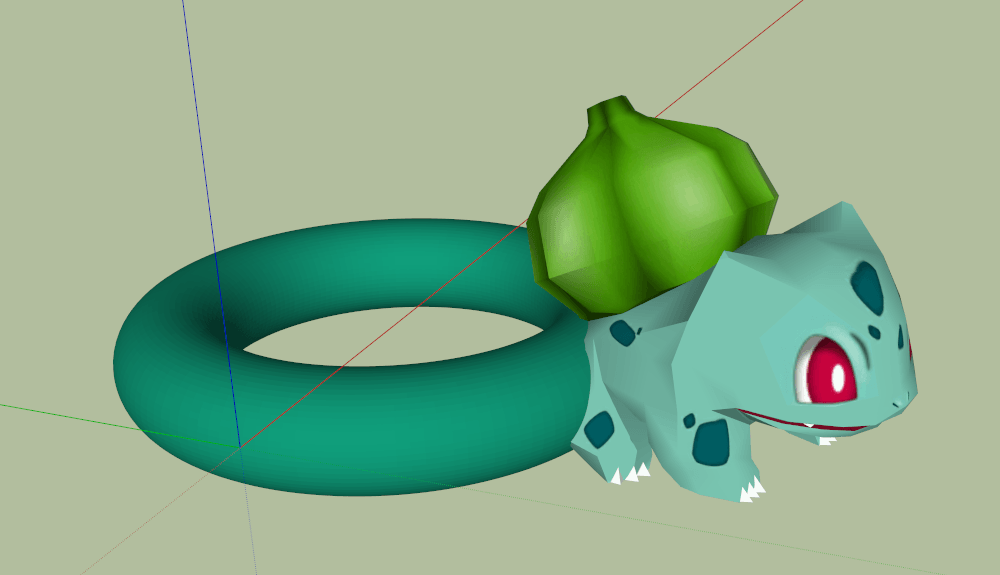 Both Design and SketchUp import and export models as .stl files, which lets you bounce a file between them. An imported .stl file in Design only allows rudimentary editing; you can scale, position and sometimes Boolean (combine with other items) it. An .stl file imports into SketchUp as a SketchUp model, which lets you do any kind of editing. Both programs also play nice with 2D files. Design imports .svg files, which enter as Design models, enabling you to quickly work with them. SketchUp imports raster (pixel pictures, such as the .jpg) files, which you need to trace before modeling. But you can also affix the raster to a model as an image or texture.

A raw Design file is generally more 3D-printable than a raw SketchUp file. This is because the nature of solid modeling doesn’t create the holes that stop a printer in its tracks the way a mesh modeler does. That said, it is quite easy for a Design file to have flaws like too-thin or non-combined parts, making it unprintable. Luckily, Design seamlessly links to another free 123D app called Meshmixer, where you can analyze, fix and prepare the file for printing. SketchUp has downloadable tools— some free, some with a nominal cost— that prepare a model for printing. I run those tools on my SketchUp models and then run the exported SketchUp .stl file through Meshmixer for best results.

When you outgrow Design’s capabilities, you might upgrade to Fusion 360, an Autodesk program that’s sold as a web subscription service. Its similarity to Design will shorten your learning curve. As for SketchUp, you may eventually want to purchase the Pro version for its professional-level capabilities such as importing AutoCAD floor plans (these come in as SketchUp models, enabling you to quickly build a house on them) . But SketchUp Make, 123 Design, Meshmixer and Tinkercad are all great programs to cut your teeth on.

Here are two vids from my YouTube channel that show how to make files that I’ve uploaded to Pinshape. The Design vid shows how to manipulate forms to make a model. The Sketchup vid displays some basic tools plus one that helps prepare the file for printing.

Want to learn more? Visit my Youtube channel for tons of SketchUp and 123D tutorials, and have fun modeling your own creations!

Thanks again Lydia for sharing this with the community! If you haven’t already, go check out her designs on Pinshape!