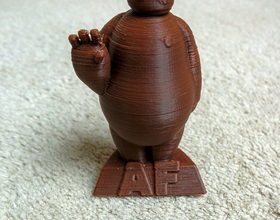 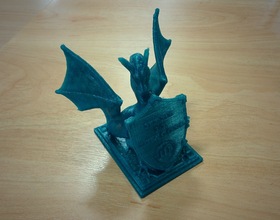 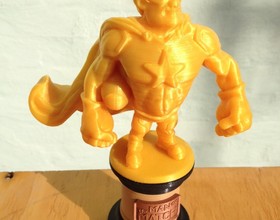 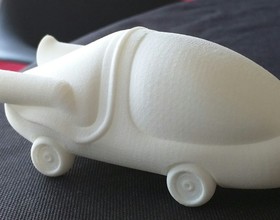 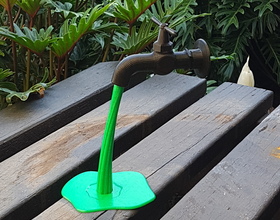 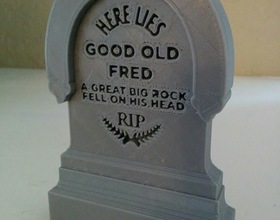 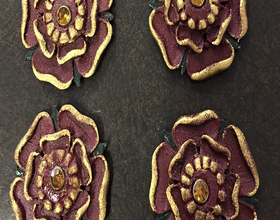 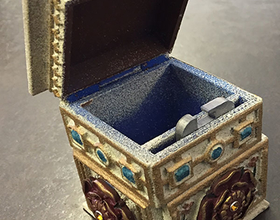 A review of the Mini Fabrikator 3d Printer from HobbyKing

A little background on the printer - the Mini fabrikator is made from an open source design called the TinyBoy. It was created as a solution to bring 3d printers into the classroom with a small footprint and price point.

For starters it comes assembled and almost ready to print out of the box. The only things you would need to do with the printer is install the filament guide tube for the extruder and double check the z-axis homing switch to make sure the extruder is at the right place.

Instructions are pretty easy to follow to setup repetier-host for the printer. A manual is included that outlines what each setting should be. The convenient part is you can download the slicer profile from HK and it works very well. If you need to make a custom profile it is nice to have that as a template to work from.

As some of you may know I had trouble printing out of box because of firmware issues with the usb-serial converter chip. The chip they had on the board was a counterfeit and was bricked as soon as I plugged it into my windows machine. There are ways around this and I tried them all before booting up a linux machine and was able to do a test print.

The first print was terrible because I didn't have the slicer settings set I just hit print but I was happy after the whole ordeal. The good part was that Hobbyking agreed to send me a new control board at no cost. It hasn't arrived yet, and I'm not patient so with the assistance of Scott Walde I was able to replace the fake chip with a legit one and it just worked.

As you can see from a lot of my posting the quality of the prints is pretty good. I've been mostly doing 200-300 microns (0.2 mm - 0.3 mm) and it is pretty consistent. Build surface adhesion has not been a problem so far for printing with Polylactic Acid plastic (PLA). Included with the printer is are a few 8cmx8cm squares of blue painters tape which contribute to the good adhesion.

It isn't designed to work with Acrylonitrile butadiene styrene (ABS) plastic, however there are some youtube videos that prove otherwise.

Issues I have had with the printer:

It becomes very apparent when you are printing/loading filament if the extruder has become clogged. The quality of your print is affected or when loading filament it comes out thin and lumpy. The solution is to take apart the extruder and clean it out. Taking the extruder out was not too difficult. There is no need to take the whole printer apart, just the front panel is enough and it did not appear to affect zeroing of the other axis. To clean out the nozzle I had to dissolve the PLA plastic. Acetone does not disolve PLA, though it does affect its properties. Methylene chloride (MC), which is one of the ingredients in most acrylic cements, does however. Being the hackerspace that we are, Techworks has access to said chemical. Soaking the nozzle in a little MC and taking a needle to scoop out the dissolving plastic seemed to fix the issue. Installation of the extruder was straightforward. Zero the z-axis again and printing resumed.

The printer is designed with just two openings to access the print bed. Because of the size, it is rather awkward to remove large prints that are adhered to the print surface. Since cleaning the extruder, I have not screwed in the front panel for this reason. It does not affect the frame when printing. I will replace the front panel with a clear piece and a hole cut in it to help with this situation. Another thing to investigate is the z-axis homing. Make sure the nozzle is in the right place and items will be easier to remove.

I haven't found a good way of swaping filament yet. Mostly because I have just been printing with one colour consistently. I have noticed that the makerbot PLA filament will work with the printer but it does not finish nicely. It seems to cool inconsistently and you are left with one side that is nice and the other is not. This is apparent on my gear heart print if you want to see it. The ESUN filament supplied by Hobbyking seems to be working really well with this printer and I will just stick with that. It isn't too expensive at $10 for 500 grams. However shipping is quite a lot so I will be sure to stock up when I do another order.

I have recently acquired a second Mini Fabrikator. I have set up a Raspberry Pi to run Octoprint but haven't printed anything with it yet. I am excited to see the results. When this is complete I will share it with you guys.

In conclusion I would recommend this printer to anyone looking for a cheap gadget to play with. The price point is $180 USD and with the free shipping I felt it was worth it.