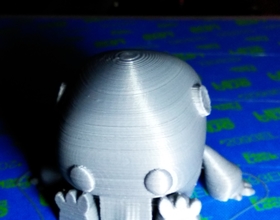 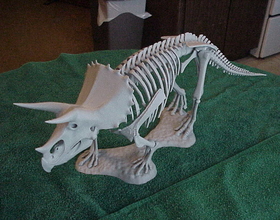 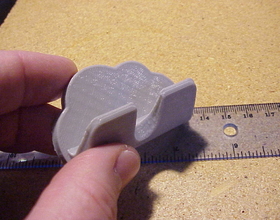 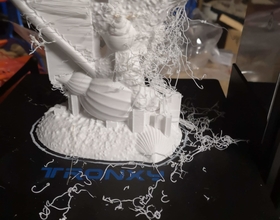 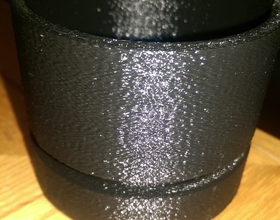 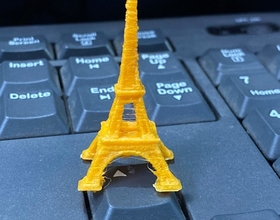 The Best Value for The Price Paid

Actually my printer is Tronxy-P802MA (P802D). I bought it from ebay locally from Toronto, in May 2018. It came in form of kit, neatly packed in a box. There are many youtube videos on how to assemble it. It was really easy and full of fun assembling it. Took about 3 hours to make it operational. It comes with filament too. But I also ordered white filament from Solutech along with the printer. Leveling the bed was little tricky, but again community support is so strong that it took me just half an hour to learn how to level the bed properly. Since then (5 months), I had re-leveled the bed just 3-4 times when I installed new 3D-printed accessories on it. My 1st print was my daughter's name tag keychain, and another was Eiffel tower. Both of then were much satisfactory and successful at the very 1st attempt. After that, I have taken many prints out of it. And they have turned out to be EXCELLENT in quality. Prints look well polished and awesome in quality. It has a fairly large build volume, heated bed, and supports printing with many filament types. I never had to take any help from customer support, because community support is awesome. I strongly suggest this printer to anyone thinking of buying a 3D printer.  You will never regret. Some of my prints, you may find here: thingiverse.com/pinakoza/makes

Excellent Printer for the Price

The acrylic frame is obviously the weak link here with most of the parts being out of square which makes for a fun time aligning. Once you deal with these issues it works surprisingly well and I definitely recommend  it for the mechanically inclined. The printer comes well packaged with extra hardware and some items are preassembled.

Got it cheep & it runs well

I got it really cheep, she runs well and I have had no issues with her to date

Needs some love, but worth the effort

Took a lot of work to figure out the leveling system for the printer. There is virtually no online support for the Tronxy, which is a huge pain for someone just starting out in the 3d printing world. As it is right now, I have to start the print, then quickly adjust the bed to the proper height to print.

That being said, now that I am able to get the bed leveled, I have been able to print some pretty impressive items, and most prints turn out very clean, with little to no work required to be ready.

The machine is fairly quiet, and heats up within a minute or two, and prints fairly quickly.

Feeding the fillament in is a bit of a pain, as the hole doesn't quite line up with the extruder, and it takes a but of wiggling around to get it lined up.

Overall, I would still recommend this printer for someone just starting out. For the price, it's a decent first printer that will get you into the game.

A cheap and credible entry into 3D printing

Physically the printer is simple to construct from the kit received, it works well with freely available Repetier software, and is cheap enough to be worth a dabble for the novice hobbyist. It won't produce retail quality models, unless you heavily overhaul/upgrade it, but it allows you to fire out trinkets and gizmos relatively easily.

Leveling the bed is a bit of a pain, it's trial and error to get it to the right distance from the extruder; the provided firmware can be a little buggy (unexpectedly shutting of the bed or extruder heaters); online support seems scant.

However, all in, it's a worthwhile printer to get you dabbling in the 3d fabrication world - recommended.

Ordered this off eBay--paid only $79.45 in January 2020, so I figured it could be a good fixer-upper project. I sort of doubt that it was made by Tronxy--it appears to be a generic Prusa I3 knock-off, but the filament spool holder actually does say "Tronxy" on it, so who knows? When I bought it I also bought a couple of spools of 1.75mm PLA filament, which is the only filament I have used so far.

The kit was well-packaged and nothing was damaged in shipping (from California). It came with a flash drive (actually a micro-SD/USB adapter) with Repetier software and some instructional files on it--one was basically a pictorial assembly guide, but nothing like a complete user's manual. The laser-cut acrylic structural parts were all covered in adhesive protective paper that had to be removed, which was the most tedious part of the whole assembly process.  Once that was done, assembly seemed fairly straightforward, but some of the illustrations in the included guide were a bit ambiguous, so after it was all put together, I took it apart and rotated some of the stepper motors in their mounts, so the connectors were positioned more conveniently. There was really no information provided about how to dress the various connector wires and cables, though some spiral tubing was provided for that purpose, so I just looked around for photos on the Web to see how others had done it and found enough clues to make something workable.

The supplied hardware was okay, and almost everything I needed was there, and in some cases, I had extra screws and nuts, which is always a nice thing. But one key part--a M3-size wingnut for one of the four bed-leveling screws--was not tapped at all, so it would not thread onto the screw. And there weren't any extras in the kit. Not a biggie--I had an extra M3 nut that has worked okay--it just requires another tool when I'm re-leveling the bed.

As for performance--since this is my first experience with 3D printing, it has taken me a while to get things dialed in enough to get a halfway passable print. The first couple of attempts--a couple of different calibration cubes and a Benchy (the little tugboat figure used as a benchmark) were pretty dismal. Some layers didn't seem to be adhering to one another, so my first cube print basically tore apart when I tried to remove it from the print bed. After these first few attempts, I spent some time trying to fine-tune the device--lubricating the Z-axis screws and shafts, taking a bit more care to level the bed, and tightening up the X-axis belt, which I had installed a bit too loosely from the start.

Then I began searching on the Web for help with my obvious print-quality issues, and that took me into the various settings menus in the Repetier software, which I'm learning more about, but which still mystifies me to some extent. (I might try another software package at some point.) By fiddling with things like extruder flow rate, and the travel speed of the print head, infill percentage and a few other settings, I've managed to get somewhat smoother and more accurate prints, with fewer problems with layer adhesion and other issues. I'm still not satisfied with the print quality, but I'm not done sorting out the settings.

Although this printer, with its laser-cut acrylic frame, is surely not as accurate as other printers with more rigid frame architecture, I have to say I'm surprised that it does as well as it does. Granted, I haven't tried printing anything with a lot of fine detail yet, and I still haven't found the right settings to make the tops of flat objects look halfway decent, but when I purchased this for less than $100, I figured I'd be lucky if it worked at all. It has thus surpassed my expectations.

The bed leveling is quite fiddly and has to be adjusted a LOT, and I'm not sure I've dialed that in right just yet, but I get closer with each attempt. I've seen some printable bed-leveling adjustment knobs out there that might help with that. I've also had some trouble with the Z-axis movement due to misalignment--that seems to have been simply a matter of getting things adjusted just right. One additional problem surfaced with the Z-axis--one of the connectors on the four-wire cable that connects one of the Z-axis steppers to the controller board has a loose pin that can work itself off the board contact enough to cause the steppers to be out of sync, and then the printer just jams because one side is moving and the other is stuck.

In assembly, I managed to nick one of the stepper motor cables somehow, so I ordered some replacements from eBay--the ones I received had a couple of wires reversed on one end, and I didn't realize that when I installed one of them to replace one of the supplied cables. This was a problem and those cables didn't work at all, as you might imagine. But the original was not nicked so badly as to become unusable, so I put it back on and things are fine.

Some users of this or similar clones have noted that the 3D printed bearing assemblies on the Z-axes are sometimes warped or otherwise out of whack, but the ones that came with my printer kit seem to work acceptably, though getting everything on the Z-axis aligned properly has not been a trivial task, not for me, anyway.

Bottom line: I knew there was probably going to be stuff I had to fiddle with on this $80 DIY clone printer kit, so frankly, I'm not disappointed, and I'm actually surprised that I've been able to get it to print at all. I don't regret my purchase, because I actually sort of enjoy fiddling with this kind of stuff, and I'm not intimidated by the problem-solving that has been necessary with this kit. The process of working out the problems and fine-tuning the mechanical aspects of the device has given me the opportunity to learn much more than I would have learned if I had bought a printer that was just plug 'n' play.  I would say that this kit is probably not a good choice for absolute beginners with no real DIY electronics or kit-building experience. But for someone who knows her way around basic electronics, knows a few things about how machines work, has a limited budget, knows how to use simple tools, and is resourceful in searching for and finding help on the Interwebs, it's not a terrible idea. Overall, I'd say that even with the frustrations and constant (thus far) need for readjusting and fine-tuning, it's been a fun experience.

I hope this is helpful to someone out there.

A prusa clone been around a good while now. Cheap to buy. But would seriously recommend upgrades in all departments! plenty of support for this, I changed almost everything mechanical, made sure everything moved smooth as possible. Will work well once assembled and setup. I use octoprint through a raspberry pie,  a good way to go.